QR codes are dead (before they even began)

QR codes are dead (before they even began) 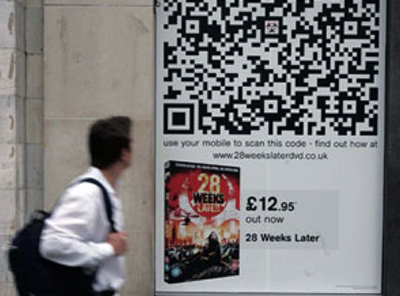 Forget QR codes, the utterly pointless piece of faux-3D trickery. They’ve popped up in places we don’t want them, need them or will ever use them and we should think about taking them off the marketing pitch and sending them in for an early bath.

Radical the opinion might be, but radical a QR code is not. I sense whispers in marketing WIPs around the country discussing what brands should do with QR codes, how we should embrace them and the results we’re looking for. I sense the same whispers discussing whether the consumer actually, really cares.

A QR code is just a bar code. It’s a different shape and size but its purpose isn’t much different: to code and deliver information. They have been around for years, but with the increase in smartphone usage, some bright sparks have decided that now is the time for the QR code to shine. How wrong they are.

‘But wait,’ squeal the QR fans, ‘the QR code can deliver us exclusive content.’ Like when we’re standing in a bus stop – just the place we want exclusive content. Or an exclusive video – that a brand is going to want us to watch anyway because it spent tens of thousands of dollars making it and only showing it to five people will never justify next year’s marketing budget.

Maybe we could just forgo the ‘exclusive’ and it could send us to places where we can find useful information. Like bus times. Details about a house. Or prices on tickets for the theatre. The trouble with sending me to a website to get bus times, is that what I would really like is the bus times on the bus stop in the first place. I’d love to think real estate agents will embrace the codes for ‘for sale’ signs but we know that they’ll never part with the simplicity of a mobile phone number because they want you to call them.

The problem of the QR code is its ability to act as a gateway we simply don’t need. It’s an extra stepping stone to content that a brand actually wants us to get to. It’s getting in the way of things. We all know the number of clicks a consumer has to go on to find their ultimate goal should be as few as possible, so throwing an obstacle the shape and size of a QR code just slows our recruitment. What if my phone is dead? What if I’m on a call? What if I’m playing Angry Birds? I stop all of those and scan the code to take me to a site I’ll have forgotten an hour later? What if I’m simply not that interested?

I stood in a room today of people and talked about social media, mobile technology and eventually, QR codes, and of all the other marketing strategies these business people could employ, I genuinely felt that QR codes would be at the back of a long line. I asked them how many had smart phones. 80% of the hands went up. I asked them how many had a business Facebook page. Three hands went up.

Three hands in 80. How do we get people to use QR codes for their own business when they can’t grasp a Facebook page? Only 25% were on LinkedIn. Sure we’re talking about a service-based industry room here that traditionally hasn’t embraced Facebook for business, but 50% of that room was under 35 and switched on to most modern tech. We were also in Sydney CBD, not a country backwater.

I have a friend who has developed software for people to put QR codes on business cards, which then allows a scanner to transfer that information directly into the phone’s memory. He’s a clever man, but as I point out to him, I just don’t think he gets consumer behaviour. Surely the early adopters might fawn over the chance to QR code a phone number into their memory banks, but many will simply say ‘just give me a f**king business card’ and then throw it into the stack of all the other business cards of people they’re not going to contact. There needs to be a critical mass of engagement for a product to succeed. QR codes aren’t going to reach that mass.

The consumer is lazy or uninterested – look at the guy in the photo looking at the code and not the product. I’m convinced that holding their phone up to something for five seconds to find out it’s a free sample of washing powder will eventually put pay to any idea that the QR code will become part of our life.

Let’s dump the idea and stop selling ourselves the belief that because the gateway to our idea seems to be cool and funky, that this makes the idea itself cool and funky. A viral idea will spread if its good, not because we’re making people jump through a hoop to access it.