To plug the launch of its new ginger cider variant, Bulmers has launched a Facebook page promoting ginger pride.

Created by Liquid Ideas, the campaign for Bulmers Ginger carries the tag line ‘Proud to be Ginger’ and will culminate with a ‘Ginger Party’ in Sydney. To go into the running for tickets to the event, punters are asked to describe which ginger they’d take as their date in 25 words or less.

Bulmers Ginger is the first ginger cider to launch in Australia, introducing a new variant to the barnstorming cider market, which is the fastest growing alcohol category in Australia. According to Nielsen’s Scantrack Liquor study, the category grew 43% in the 12 months to June 2012.

While the Facebook page has a tongue-in-cheek tone, it could potentially fall prey to the Advertising Standards Board’s recent ruling that fan comments on Facebook pages are effectively ads and need to be monitored by the brand.

On a ‘house rules’ tab of the page, Bulmers writes, “Comments posted to this page do not necessarily represent the opinions of Bulmers or Carlton & United Breweries.”

And if you’re thinking of making any disparaging ‘red hair, no friends’ remarks, think again. Bulmer’s also writes that the page is for the love, not ‘trolling’, of proud, confident gingers. “We will review comments and will moderate or remove any that are inappropriate, offensive, inaccurate or unlawful, so keep it clean folks, there’s a time and a place.”

Bulmers Ginger will hit the market following the Ginger Party launch event, to be held on Tuesday 18 September at The Standard in Sydney. 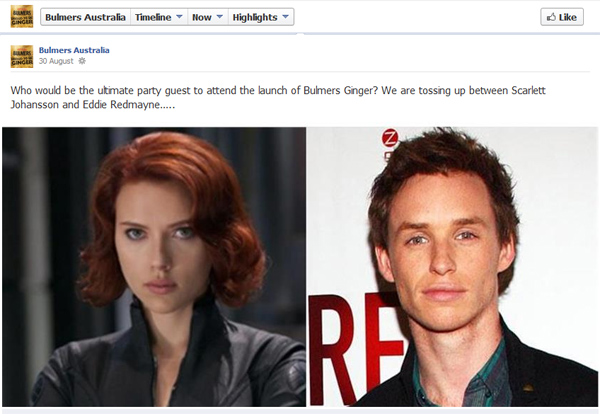