The future of… social media

The future of… social media

This feature first appeared in the December 2011/January 2012 issue of Marketing magazine.

As 2011 comes to an end, Marketing magazine decided to take a look at the most rapidly evolving channels. The pace of change across the industry made this a difficult decision, but the three we’ve analysed all share a common, and ever evolving, game-changer: technology.

In the first of our predictions trilogy, Matt Granfield looks at how social media and brands will meet in 2012. 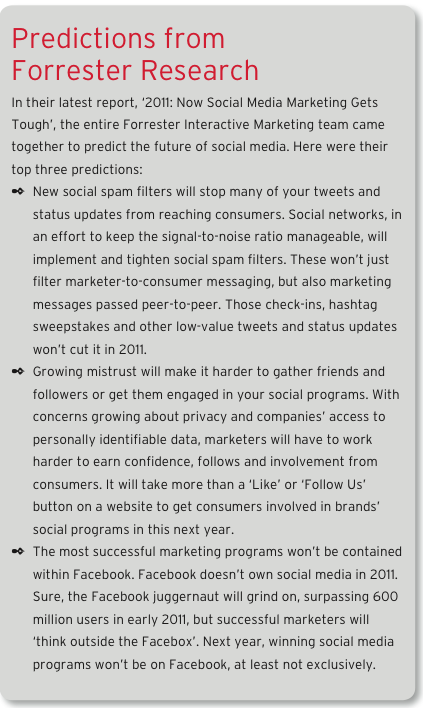 As Brian Solis, principal at US research group Altimeter (and world-renowned social media guru), says: “We’re finally approaching the end of the hype curve.” So now is the time to start making sense of exactly what social media means for the future of business and media.

There are plenty of major brands in Australia that still don’t have a social media strategy, of course, but they’re lucky in a way, because for every company still wondering whether or not to open a Twitter account, there are two others who’ve already paved a path, made the mistakes and figured out how these new social channels can make a positive impact on a business’ bottom line.

In an effort to try and see the way forward for those still trying to catch up (read: nearly everyone), we decided to speak to some Australian online marketing and communications pioneers and ask them what they saw around the corner for the future of social media.

No one would challenge Telstra’s position as a digital marketing innovator in Australia. The region’s largest telco has typically been one of the first major corporations in our part of the world to embrace each social channel as it has emerged. It was blogging, tweeting, Facebooking, Flickring and YouTubing before most companies had figured out what LOL meant. Leading the charge as head of online communications and social media from 2009 until a couple of months ago, when she left the organisation to join PR agency Haystac, was Kristen Boschma. Her crystal ball sees marketers and communicators joining hands to get a whole lot more sophisticated in their use of the new technologies, in a whole range of new places we didn’t think social media could go.

“Up until now we’ve seen companies leverage social media in their marketing campaigns, but I think in the next 12 months what we’ll see is a real increase in sophistication and skill of corporate Australia embracing social media,” says Boschma. “In particular, we’ll see a real increase in social CRM and a much greater knowledge of our customers’ buying habits, and using social media to analyse consumption habits. I also think we’ll get a lot more sophisticated in terms of leveraging our PR and our marketing efforts and bringing them all into alignment, so we’ve got a more consistent approach and a more consistent brand view.”

She also thinks consumers will really start to define how they use each channel and will demand platforms that allow them to really segment the various communities with which they engage.

“The strength of any new social network has to be measured on the habits it forms. For example, Facebook has changed the way we use the internet, full stop. It has changed the way we engage with our friends on a personal level. If I look at Google Plus and the huddle approach it has taken to video conferencing, I think that has really powerful implications for the way companies can market to consumers, in terms of bringing them into their inner circle, making the interaction with the company real. Companies will start saying, ‘We’re going to have a hangout now with the ice-cream flavour development department. Come and hang out with us and tell us what you think’, or ‘Come and see what happens at Sunrise (the Channel Seven breakfast program) in between the ad breaks and find out what really goes on’. Bringing consumers into your corporate hangouts and making them much more a part of the organisation, and the inner workings of your organisation, is a really interesting idea.”

Beyond innovations around video conferencing, Boschma says people can also expect social media to start reaching out to them in places that have traditionally been social, but not necessarily connected.

“If we’re talking beyond 12 months, what’s going to be really interesting, and we’re starting to see the signs of it already, is social media in completely different environments. At the moment it’s all about PCs and smartphones and tablets, but a couple of years down the track, social media will be reaching your lounge room via your TV, or your car via your stereo. That’s going to give social media the power to be pervasive on multiple, multiple channels,” she says.

Over in the banking world, it may still be a while before you can check your credit card balance on your subwoofer, but NAB (National Australia Bank) and the Commonwealth Bank have been introducing a number of innovations in the way customers can interact with the organisations and find consumer-generated opinions of their products. The Commonwealth Bank introduced an online chat function in 2009, which allows customers to initiate an online chat with call centre staff. This technology hooked into the existing call centre queue management software and allows for intelligent routing of requests to specific call centre groups. It’s not rocket science, but it was an important step forward in online engagement for an industry that has more stringent online security issues than any other sector (except perhaps for defence).

In another interesting move, NAB recently became the first Australian bank to adopt what it dubbed ‘social commerce’ on its website to assist customers in the online buying process.

Since October, NAB has been displaying customer ratings and reviews of its credit card products online to provide useful feedback to potential customers to help them make better decisions about which products might suit them.

“Social feedback has a big and growing influence on purchase decisions, and reviews by other NAB customers will provide valuable, independent feedback for those considering an NAB credit card,” he says.

Smith believes that the reviews will also help existing customers get more out of their products and learn about features of which they previously were unaware. Importantly, the feedback will be used to give NAB insight on what customers like about their credit cards and highlight areas for changes and improvements. To date, NAB has received more than 360 customer ratings and reviews on seven of its credit cards.

Consumer ratings aren’t a new concept, of course. TripAdvisor, amazon.com and countless other ecommerce platforms and review websites have been socialising opinions for more than a decade, but, like NAB, big businesses are only just starting to get more perspective on the wider business potential of what Karalee Evans, digital communications pioneer, senior director and APAC digital strategist at public relations firm Text 100, calls ‘the collaborative consumption of information online.’

“We’re looking at collaborative wikis that are popping up where people are taking ownership of the sharing of information,” says Evans.

“It’s the TripAdvisor model, but we’re starting to see it for sectors such as health and education. MySchool is the government example of where people can collaborate and network based on how their school is performing. They can talk to each other and find out information about a school’s arts program, or its sports program.”

Evans, who counts Optus, IBM, Fuji Xerox Australia and Yahoo!7 as clients, says the smartest companies are chopping down their silos and using social platforms to let different departments engage with each other.

“The businesses that will be competitive in tomorrow’s markets are the ones that can adapt to change and take a whole of business approach to collaboration and social media, not just from the marketing or PR department,” she says.

“CMOs need to be talking to their CTOs. Businesses need to remove the silos of their departments and start to ensure that they’re collaborating and sharing business intelligence. And that’s where the concept of ‘big data’ comes in – getting companies to use and analyse everything they know about their customers across all departments. Businesses need to understand how their consumers are behaving, where they’re going and start to forecast what the trends are.

“They need to trust their agencies as well, and the strategists in those agencies need to be on top of the trends and making really frank and fearless recommendations about what businesses should be doing – and they’re going to either sink or swim based on those recommendations,” argues Evans.

Which is all well and good if you’re IBM or NAB, but what if you’re over on the other side of the business spectrum, wondering how you can do something as simple as making your Facebook page a little more engaging or profitable?

Zac Martin, digital strategist at George Patterson Y&R in Melbourne, sums up the future of social media at the smaller end of town.

“With social media, notoriously dull and dry brands have been given a personal and sometimes even likeable voice that consumers can talk with directly,” says Martin.

“Throw some excellent social media customer service, where I haven’t had to sit on hold for 20 minutes – that I’ve experienced recently – and for me, at the moment, these are the guys who are crushing it in this space.

“The best thing brands can do moving forward is to provide that old marketing chestnut: value. There are too many brands at the moment focusing on pointless things like getting as many ‘Likes’ as possible on a status update. As more and more brands jump online, consumers are going to become more selective about who they like/follow/subscribe to, and the brands who write shitty status updates that don’t actually have any value… will be the first to go.”

This article is featured in the December/January issue of Marketing magazine.

Matt Granfield is a writer, vagabond and volcanophobe from Brisbane. He was a newspaper reporter once upon a time, but gave it up when he realised there were more exciting things to write about than under-12s soccer finals. He also didn't like the feel of newsprint. These days Matt is a senior contributor for a number of Australian publications, mostly in the marketing and digital world, and his first book – a satirical look at popular culture called HipsterMattic – came out in November through Allen and Unwin.