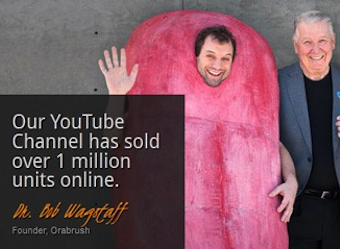 After recently hitting more than one billion unique visitors every month, YouTube has upped it to six billion views per month according to the Wall Street Journal. As a result, YouTube generated roughly $4 billion in revenue in 2012, up from $2.5 billion in 2011, and it has made the online medium a major drawcard for businesses looking to reach out.

“Follow the audience,” is the message from executive chairman of Google, Eric Schmidt. The chairman informed in a recent pitch to advertisers that, “your company should pay attention to the site if any of the below stats ring true for your organisation.”

And subscriptions are also key, with millions of subscriptions happening each day. Subscriptions allow you to connect with someone you’re interested in — whether it’s a friend, or the NBA — and keep up with their activity on the site.

Yet it’s the continued rise of mobile and the stats surrounding its dominance that intrigue most. With 25% of global YouTube views coming from mobile devices, that’s one billion views a day on YouTube mobile, is available on hundreds of millions of devices and traffic from mobile devices tripled in 2011, so the evidence is clear.

It has been reported that the majority of the online video traffic is for entertainment, mostly an opportunity for advertising to consumers, but there still “remains a window for businesses to create original content themselves and share it,” says Schmidt.