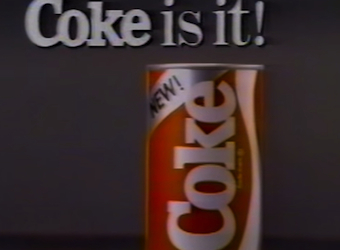 Companies are always looking at ways to improve current products, reach a new market through brand extension, or try to break into a market with something slightly different to what is already on offer. But what happens with the ones that don’t make the cut? Where did they go wrong?
Here are 10 of the world’s biggest product failures…

One of the world’s most famous product failures was ‘New Coke’, launched on April 23, 1985. Coke took a huge risk and changed their formula for the first time in 99 years. To say New Coke was not a success with soft drink lovers is an understatement. In less than three months Coke put the lid on the new recipe, and put cans back in the hands of consumers by reintroducing the original.

In July 2009, iSnack 2.0 was chosen from 48,000 suggestions by Vegemite fans as part of a PR campaign to name the new cheese-based spread. The creamier take on Vegemite was ridiculed as consumers could not understand why tech-savvy terms had been used to name a food product.
Hatred for the product spread quickly with the #vegefail trending on social media the day the product was launched.
Kraft ran a campaign to rename the product leaving some commentators to speculate that the whole debacle was just a clever PR move… because all publicity is good publicity, right?

September 4, 1957 marked ‘E-Day’. After a period of promotional campaigns, offering teasers of the Edsel, 2.5 million Americans poured into dealerships to get a glimpse of the much-anticipated vehicle but sales quickly reflected the public’s disappointment.
A combination of factors contributed to the Edsel’s lack of success: the country was in recession, people were turning toward more fuel efficient cars, and they weren’t ready for its unique style.
The Edsel was off the market by 1960.

In 1999 Cosmopolitan branched out from the magazine business and launched Cosmopolitan yoghurt. It was on shelves for a mere 18 months. The logic behind the magazine venturing into the dairy business was: ‘sex sells’, and ‘Cosmo is sex’, so therefore they could sell anything. However, the yoghurt failure proved it’s not possible to transfer ‘seductive’ to everyday food goods.

Just like Cosmopolitan, Bic attempted to extend their brand into products completely unrelated to anything they have produced before. After successfully occupying the biro and lighter business, Bic decided to create disposable women’s underwear and perfume. Launched in 1998, the items were taken off the shelf early by 1999.

The drink was developed in the 1980s, and despite passing initial tastes tests, it failed in the market. Critics believe the product did not do well because the Lifesaver name gave consumers the impression they would be drinking liquid candy. This story reminds us of this viral video based on the ‘myth’ (or is it?) that mixing Pepsi and Mentos creates an explosion. This video even further takes away the attraction of mixing lollies with soft drink.

Microsoft’s Zune was launched in November 2006. The company hoped it would be able to compete with Apple’s iPod, which had been on the market since 2001. During the holiday season of 2008, Apple’s iPod revenue was more than $3 billion, the Zune trailed marginally behind at $85 million.
The Zune wasn’t necessarily a bad product, it was probably the fact they were five years late to the party making it pretty difficult for them to get in the door. The product was eventually removed.

Colgate, in a bizarre attempt to extend their brand in the US, launched a line of frozen foods in 1982. The company was hoping to capture the growing ready-to-eat meal market. Many customers were confused at the idea of a brand, associated with hygiene and oral care, making meals. The product never left US soil.

‘Thirsty Dog!’ and ‘Thirsty Cat’, a slightly carbonated water for pets, was introduced in 1994 by a company in Florida. The bottled water was designed for pampered pets and came in two thirst-quenching flavours: Crispy Beef for dogs and Tangy fish for cats. Despite the water also being drinkable for humans, the product didn’t take off.

Apple released the first brand of digital cameras in 1994. Three models of the QuickTake Camera were released, the 100, 150 and 200. Built in partnership with Kodak, the QuickTake 100 had 640×480 resolution and sold for $749.
The product range failed to capture the market and was discontinued by Steve Jobs in 1997.