Is personalisation really holding brands back, or is it opening a new age of marketing? Industry thought leaders Adam Ferrier and Stewart Gurney face off.

This article originally appeared in The Madtech Brief, Marketing‘s second print issue for 2019

It’s a tough ask, to attempt to convince a room full of marketers that personalisation in their comms comes at the detriment to their brands. That was the task for Adam Ferrier, founder of Thinkerbell and consumer psychologist. His opponent on the negative podium, Stewart Gurney, Australian chief strategy officer at phd, had an equally difficult task, challenging one the industry’s most well-respected thought leaders.

In the end? Well we won’t spoil it for you. Decide for yourself – this is a conversation on personalisation, after all. The jovial discussion took place at the final lunch of this year’s Ad:Tech Sydney event. Here’s what Ferrier and Gurney – each man leading with the disclaimer of having a few cocktails under his belt – had to say:

“True personalisation means staying the f**k out of the way of people’s lives and letting people get on with what they want to do.” 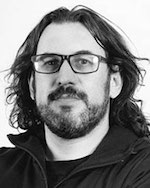 The crux of Ferrier’s contention broke down into five factors. The first, “You (as a consumer) don’t give a shit. You’re all busy, you all have lives, you all have family and friends and things to do.

“You’re all tired by the end of the day, you all want to reward yourselves occasionally – the last thing you want to do is have a conversation with a personalised brand that says X about you.”

He went on to distinguish the difference between passive and active acceptance of brand communications, explaining that at a broadcast level, information tends to ‘seep’ into the audience. “It’s also the reason why occasionally it will make you laugh – because when I make you laugh you’re emotionally connecting, your defences are down and you’re trying to get the information happening into you. That’s how marketing works.”

When messaging is personalised, however, it’s shifted from passive acceptance to active reactance, according to Ferrier.

“You’re now assessing. As soon as you start to asses shit then you enter into a kind of relationship with the brand, where the brand is trying to prove something to you and you will automatically argue against it.”

His second factor was that people, generally speaking, like to be part of the crowd. “If we talk about how to increase motivation, social norming accounts for more variance in terms of increasing our motivation to do than just about anything else.”

According to Ferrier, social norming is impossible to achieve through personalisation by virtue of its very application – creating en masse societal changes in attitude cannot be instigated through messaging crafted to the individual.

Ferrier’s third factor: “brand is simply a promise kept. And what’s your promise if you’re personalising your message to everybody?”

Ferrier’s fourth factor: “you focus on the wrong people.” Ferrier suggested that personalisation only really happens within an audience that is already purchasing that brand, which leaves the rest of the market untouched. “It’s the massive opportunity cost of personalising your brand against a whole lot of people who have a relationship with you anyway, versus the mass market – which is where the opportunity lies for most businesses.”

Ferrier’s ultimate argument on the point was that personalisation dilutes the customer’s understanding of the brand’s identity and therefore the value the brand is meant to deliver.

“If you ask people what they really want from brands, they would ask to be left alone.” According to Ferrier, brands grow through mental and physical availability; by being constantly in the face of consumers. Thus, following Ferrier’s logic, personalisation lies at the antithesis of brand growth, because true personalisation to an individual consumer’s desires would mean no communications at all.

“Personalisation is a little bit like trying to put a plant into a really dark room and expecting it to grow.”

“If you aren’t playing, experimenting, testing and learning in this personalisation space… a competitor – even a competitor you didn’t realise was your competitor – most definitely is.”

“I hope you all realise you were just totally played by Adam Ferrier,” Gurney began, speaking of his excitement around how personalisation is set to transform our relationship with products, services, content and advertising.

“Twenty years ago, think of all those barriers we had – we had to endure so much. We had to listen to content we didn’t really want, we had to do all these things to get through it, to get the stuff that really interested us – a bit like Adam’s speech.”

To set the scene Gurney presented several supporting statistics, citing Deloitte’s research that found that 42 percent of consumers who are interested in customised products or services would still rather be led by brands than choose from a selection of curated options. In addition, according to Gurney, “one in five consumers who expressed an interest in personalised products or services are willing to pay up to a 20 percent premium,” with 42 percent willing to wait longer for personalised products also.

Gurney refuted the claim that personalisation undermines traditional brand building activities, “The short answer is: no, it complements it.

“Brands don’t exist in a philosophical, mythical place. Brands exist in the brains of consumers as engrams, a collection of different associations and experiences.”

These personal relationships between consumer and brand, therefore, would lay the groundwork and reliable enough link to develop effective personalised communications.

“It’s not that personalisation, per se, is the threat to branding,” according to Gurney, “it’s the fact it’s related to the bottom of the funnel.” Instead, he pointed to brands such a Netflix, Mecca, Amazon and even Coca-Cola’s famous ‘Share a Coke’ campaign.

To close, Gurney posited that other brands personalising their communications is shifting customer expectations and creating a new standard, “Why can’t everything be delivered to me on my terms like Amazon does? Why can’t I get personalised content and suggestions like Spotify or Netflix? I no longer have to leave the sofa to turn my lights on, thanks to my awesome Google Home.”

Gurney suggested that brands “holding onto archaic beliefs” refusing to experiment with personalisation risk getting left behind, “If you aren’t playing… someone else, a competitor – even a competitor you didn’t realise was your competitor – most definitely is.”