Is art just for us? Artificial intelligence as the creative’s supporting arm

Is art just for us? Artificial intelligence as the creative’s supporting arm 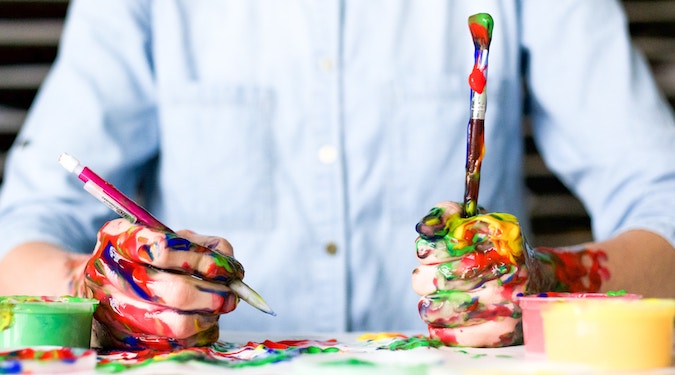 The creative world is generally thought to be safe from the rise of technology and AI, but will there come a day when computers sing our songs and paint our art? It won’t be any time soon, says Ben Plomion.

Any role that relies on human consciousness – the ability for creative thinking, spontaneous thought and unique expressions of emotions – is unlikely to be one of the 800 million roles that a McKinsey Global Institute study predicted would be lost to automation by 2030.

According to websites like ‘Will robots take my job?’ a graphic designer is given just an 8% probability of being replaced, while fine artists and authors come out at just 4%.

But this doesn’t mean that AI-based technologies can’t help the creative process. While a robot is in little danger of writing the next Harry Potter or painting the Mona Lisa, it can still make life easier for marketers when it comes to creativity.

Last year, GumGum conducted a study, ‘Art.ificial’, that explored the intersection of AI and art by devising a Turing test to see whether AI could replicate classic works of art. The study found that, while close, AI-developed art is still not art – at least not yet.

Both literally and metaphorically.

Basic AI capabilities already being incorporated into new iterations of design tools, already freeing designers of tasks like cropping, sorting and searching for imagery. Junior team members no longer have to spend hours tagging and sorting images as Adobe’s Sensei tool can now do the hard work of searching thousands of images according to various filters like depth of field and colour palette. Adobe Sensei is also developing voice commands to enable basic editing tasks to be done without touching the keyboard.

Similarly, website builders like Squarespace are also integrating AI technologies into its workflow to help with design decision and startups like Tailor Brands, who are breaking new ground in designing custom logos.

Related: Check out Adobe’s latest updates to its CX Cloud »

Trial, test and tweak (and fast)

As any creative will know, a significant amount of time is spent on the discovery process, researching and experimenting. This is where AI is poised to make a significant impact, especially when it comes to advertising. For example, companies like Tel Aviv-based Bidalgo, an AI-powered ad automation platform, offer a repository of creative that is continuously uploaded and A/B tested. It uses machine learning for image and video recognition to break down the different variables such as concept and copy, with a view to finding out why we like what we like when it comes to designing future ad creative.

Related: The science of stock – how Shutterstock Custom’s senior VP gets inside your head »

Pushing the boundaries of (human) creativity

In some roles and industries (admin roles where data entry is a large part of the job) it is a fairly long bow to assert that AI and increased automation will free up employees to focus on higher value tasks. However, the creative industry is one where this holds true. When used correctly, AI can help motivate young talent as it eliminates the repetitive and mundane work that can lead to early burnout and disillusionment – their role is to be creative but they can get bogged down in the process.

If you’re not convinced, I’d encourage you to look at the first few minutes of this video from a UK marketing conference last year. In it, Rob McGowan, group strategy officer for a UK CRM and media agency makes the case for how AI will drive creativity.

What particularly resonated with me was the opener. Here, he talks about the first documented human use of tools and how the dexterity required to handle a weapon activated an area of the brain that was necessary for language; essentially giving rise to the creation of society. He correlated this to how AI might lead to the next wave of creative innovation and dubs it ‘augmented innovation’.

As a CMO, I’m excited about how AI is helping – and will continue to help – human creativity. Far from being wary or of the impact of AI, I believe that it is an opportunity for creative reinvention, both in the media and marketing sector and in society as a whole.

Ben Plomion is CMO of GumGum