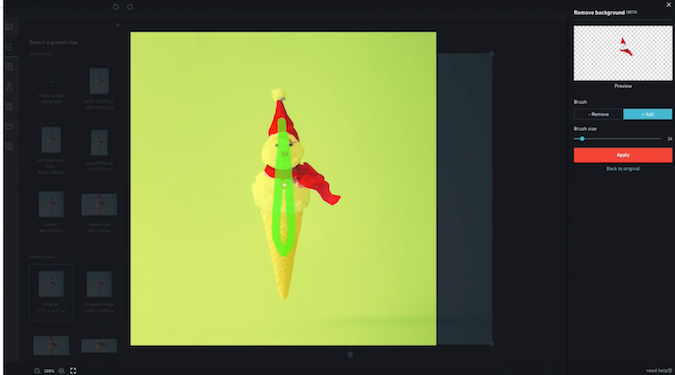 Over the past few weeks Shutterstock has made several significant changes to the platform – here’s Marketing’s break down of the new features.

We’ve seen reverse image searching capabilities across many platforms before – the most obvious example being Google’s. A user simply uploads an image to find similar pictures or to locate the source of the image.

According to Shutterstock, it used a machine learning algorithm to catalogue elements within its growing library of video, allowing a neural network analysis of input images to iterate through and select relevant videos.

What that means is: instead of trawling through video libraries generated through ambiguous keyword searches, users can now upload an inspirational image to let Shutterstock’s algorithm identify visual elements and return better curated video results.

Shutterstock’s browser-based image editor, aptly named ‘Shutterstock Editor’, is now able to distinguish between foreground and background, allowing users to simply remove the background from an image prior to even downloading it.

The addition of automated background removal is certainly a step up for the web app, though it will have a long ways to go before marketers and content creators can consider it seriously against the likes of Adobe Photoshop. For the moment, it is a convenient tool that allows creatives to source images with the optimal conditions baked in.

Since Shutterstock Custom launched in 2017 – after being acquired for a reported $65 million and rebranded from ‘Flashstock’ – the Shutterstock service has received the interest of several high-profile clients including McDonald’s, P&G and Unilever.

If you’re unfamiliar, Shutterstock Custom is a bespoke asset generation service that leverages creators from around the world, promising to deliver premium assets to marketers quickly.

Smart Brief is designed to streamline the Shutterstock Custom briefing procedure, based on analysis performed on briefs and client interviews from past campaigns. According to Shutterstock, the new Brief only asks relevant questions as the user moves through the process to capture accurate inputs and eliminate conflicting information. Clients will also have the ability to accept changes and suggested improvements from other team members, as well as adjust control, production value and service level per project throughout the year.

“The traditional creative brief process is laborious, time-consuming and leaves a lot open to interpretation,” says Sylvain Grande, SVP of product and UX at Shutterstock. “But a good brief that captures the brand voice serves as the foundation of any campaign and is absolutely essential to its success.”

“Using innovative technology, we set out to automate and simplify the experience. The result: Smart Brief streamlines our clients’ workflow and in turn, allows them to receive content faster without compromising results or having to be on set.”