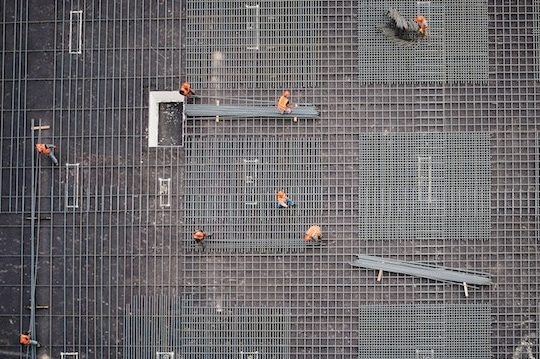 Steve Sammartino is building the world’s most futuristic house, equipped with a drone landing pad, voice enabled walls and solar roof tiles. He tells Marketing about the art and theory behind this ambitious project.

Marketing: Tell us about the house.

Steve Sammartino: I’m planning on building a house that takes together all of the pieces that modern houses are likely to have. It’s going to be the world’s most modern house. It’s going to be 3D printed, fully off-grid. It will have special delivery devices for ecommerce, a drone landing pad on the roof so I can fly to the city.

You can talk to the walls. It will be a house that doesn’t have buttons, but you talk to it and it knows what to do. It’ll be fully IoT (internet-of-things) enabled. It will have solar roof tiles. All the suppliers will be on the blockchain as well. So we’ll know who supplied what, where and when, and it will all be proven.

What matters most is putting the pieces together, not each of the pieces, because each has been done before in various ways.

Did you research all these pieces specifically for the house, or have they been on your radar before planning it?

It’s on my radar all the time. I reckon that most of the technology is on everyone’s radar.

Everyone’s waiting. And everyone’s saying, ‘when that comes online…’ Well it comes online when someone makes it come online. Sometimes it’s about taking this piece, plus that piece, plus that piece and making something new. It’s rarely a singular invention. It’s usually about putting things together in a way that they haven’t been put together before. That’s the art. It’s not really invention, it’s about putting the inventions together.

There will be a lot of prefabrication and software coming into houses starting now. Everything with complexity comes at a price. But I think that in the next 10 years, when we have prefab houses and 3D printing of complex designs online, we’ll see this stuff happen.

It’s probably more than 10 years away before it becomes common. The reason it’s 10 years away is not because it’s impossible. It’s because there are incumbents in place, there’s investments in infrastructure they already have. It’s like Amara’s Law. The technology usually takes longer to come online than we predict. But once it does come online, it usually has a bigger impact than we think it will. It’s a real pattern.

A 3D printed house. How will that work?

3D printed houses have been done before. Everything from little huts to mansions to a five-story apartment block. The way it works is that instead of laying bricks or putting up prefabricated concrete walls, you set up an infrastructure. A temporary infrastructure that has swing arms programmed to lay down concrete composite – or whatever composite material you want to use – in the pattern that you want.

The way you would look at a house-plan on the ground and build those brick walls, they get printed. Quickly. And what’s interesting about it is, you can do complex designs, in the same way your printer doesn’t care whether it’s printing an entire sheet of black paper or a complex recreation of the Mona Lisa. Because it’s run by software, the complexity comes for free. The complexity goes into the software instead of into the building process, because machines that are programmable can output complexity without any increase in time or cost.

The voice side of things. You’re talking about an assistant embedded in the walls?

Voice is a really big part of it. The thing that people forget is that electricity, light and heating, which are in our houses, didn’t start in the walls. We had to put them there. At the moment, AIs are devices, a little bit like what electrical goods and goods that provided heat were. They were little devices that we put in the house in that transition phase. Then we put them in the walls. Now we take that for granted. Now we’re going to put smarts and AI in the walls.

Most likely, in the same way that we talk to humans we’re just going to talk to the walls. Verbal commands are really the next phase.

I think we’ll still have screens, and there will be screens in this house. But the screens will be commanded by voice. Because it’s a more human way to command, with a voice and a gesture, than it is to take your attention away and look at screens and press buttons.

And there will be sensors. It’s all about sensors, voice command and gestures. It senses the humanity and it works with the humanity rather than taking the human away from what the human is meant to be doing, which is relaxing or interacting.

It’s kind of a fulcrum for what will happen in business too. People need to start having a voice engine optimisation strategy. And brands need to be requested by voice because there won’t be a front page. There probably won’t be a screen. We’ve got to stop screen-thinking because we’re so obsessed with screens.

A lot of the technologies we’re talking about will progress rapidly. Will this house be adaptable?

No, actually almost the opposite. I almost want it to be like a time-stamp. ‘At this point in time, this is how it was.’ In some ways it might be interesting, where I make some decisions on doing things a certain way. Afterwards, you’ll be able to go, ‘well that’s interesting because at this time we thought one thing, but actually this fork in the road happened where that technology never came online.’

That in itself becomes interesting and becomes the lesson. So it’s almost like a time-stamp of what we believed at that moment in time.

I think if you try and make it adaptable to the future, then you haven’t really made the decision on what you think the future will be. Even getting it wrong is a part of the interesting process on understanding the future. There will always be uncertainty.

What’s your timeframe for the project?

I want to start it next year. The core challenge isn’t really the materials or doing it. They are already out there. It’s just putting them together. It’s getting approvals from government to do it, where I want to do it and with some of the features I want to have in there.