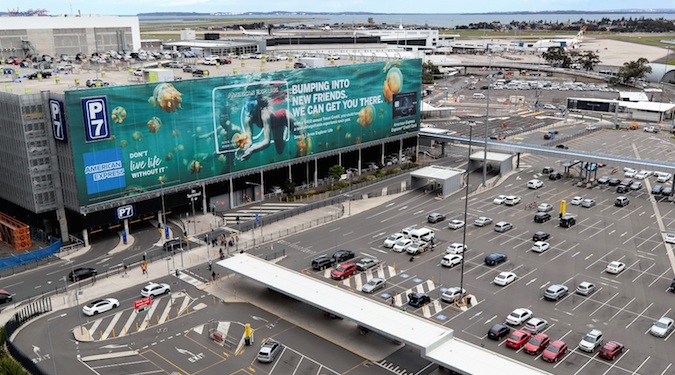 The building wrap spanning 1957 square metres covers the entire western face of the Airport’s T1 International multi-storey car park. According to Sydney Airport, the out-of-home (OOH) installation is currently the largest of its kind in Australia.

Sydney Airport general manager of retail Glyn Williams says the wrap delivers a significant media opportunity for advertisers. “We’re excited to deliver an engaging platform for Australian and international brands to tell their story to a large and diverse audience. This is a prominent location, visible to all those travelling in and around the airport precinct.”

The building wrap can be seen from the southern approach to the T1 International terminal from the M5 and Marsh Street.

Wideopen Platform managing director Tomer Cohen says the OOH company is “extremely excited about our partnership with Sydney Airport and bringing our large-format outdoor media solutions to the Australian market.”

The wrap debuted on the building with a billboard from American Express for its ‘Don’t Live Without It’ campaign.