It has been notably difficult to avoid the word ‘pivot’ recently. Social distancing measures and economic downturn, as a result of COVID-19, has forced businesses to reevaluate their modus operandi and recalibrate their strategies – and do it quickly.

Marketing recently had a conversation with Stevan Premutico, founder of me&u, about why he has pointedly chosen not to ‘pivot’ during this time, instead deciding to stay true to his brand mission. 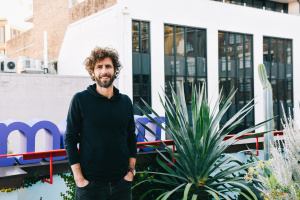 Me&u is a tech startup founded by Premutico that makes it easier for people to place orders and pay in restaurants. The app allows people to peruse menus, order food and pay their bill all through the convenience of their phones. When new government restrictions forced Australian restaurants to rapidly close, Premutico made the “hardest business decision of [his] life” by deciding against adapting me&u to a pick-up model.

Let’s face it – a pick-up model is a “close parallel” for a tech business with existing relationships in the food industry to make, and Premutico admits that it would have kept clients and partners happy in the short term. While he and his management team considered the option, they ultimately decided that me&u had an obligation to consider the longevity of the industry as whole, beyond the immediate crisis.

“We could have pivoted and done pick-up and we would have helped [partners] for three months, but that’s not the issue we need to solve. The issue that needs to be solved, in a world of COVID and in the after effects of COVID, is how do we help the industry satisfy the completely new expectations of customers?”

The startling truth is that the pandemic has had an immediate impact on an already precarious hospitality industry. The food and beverage sector is one of the largest employing sub-sectors in Australia, according to The Australian Industry Skills Committee (AISC) – a sector that is being forced to make some very difficult decisions to keep afloat.

“When the industry is forced to close down for months, it has a profoundly negative impact. So I think the brutal reality is that there’s hundreds of thousands of people that are without jobs. It’s tens of thousands of small business owners who right now are trying to work out if they’re going to open the door again or just let it go.”

Hospitality is in the blood for Premutico. He is the former founder of restaurant booking platform Dimmi. After selling the business to TripAdvisor in 2015 he swore off startups and boarded a flight to Spain to embark on the pilgrimage of a lifetime, to Camino de Santiago. On the trek he came to the conclusion that his career purpose was to “use tech to make the hospitality business better”. He then went on to create me&u.

Premutico firmly believes that the integration of technology could be the key to the industry successfully navigating a ‘contactless’ new world. With Treasurer Josh Frydenberg recently confirming that Australia is now in a recession, restaurateurs are poised to understand how to make their businesses profitable in a post-COVID market. In fact, understanding and predicting changing consumer behaviour has become a point of laser focus for business leaders and marketers across all sectors.

Historically, there have been concerns about what impact new technology has on the workforce. Premutico fundamentally disagrees with the default position of “if tech succeeds, people fail”. The way he sees it, “technology should be there to get rid of the low value stuff”. Meaning that for a business like me&u, the role of the waiter (for example) isn’t obsolete, but rather can evolve into something new entirely.

“So, rather than having a waiter focused on an order and spending four minutes at the table, working out how the customer wants to split the bill, the waiter evolves into the role of the host. The host is now focused around the service, the connection, the rapport – the magic that needs to happen on the floor.”

In an emerging world of “recession and depression”, customers will be more prudent and Premutico predicts there will be “a big squeeze into the middle of the market”. Services like me&u will address the immediate changes in consumer behaviour (a push for the ‘cashless’ and ‘touchless’ experience brought on by COVID-19); but also, generally, Premutico believes that the frictionless experience allowed by technology helps to “drive up the average spend”.

“How do we move that industry forward to be more sustainable and more profitable? I truly believe that technology can play a role to improve the efficiency and productivity of the industry.”

Premutico has a long background in hotel marketing and in terms of strategy he keeps it straightforward. He says you need to be clear on the “problem you are trying to solve”, on “your purpose”, and “obsess over the customer and make sure they’re happy”.

Although his beloved hospitality industry is facing devastating losses, Premutico has not lost hope, believing that in order to survive it’s time to “rethink” and “reengineer” for the future.

Stevan Premutico is the founder of me&u.