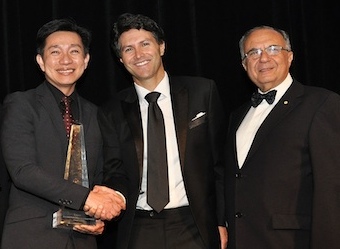 “This was a thoroughly professional marketing campaign which employed the best techniques to combat a significant health problem in multicultural communities,” says minister for citizenship and communities, Victor Dominello, of the campaign developed by Universal McCann.

“The unfortunate reality is that men in a number of multicultural communities smoke at rates more than three times the national average.

“Its marketing campaigns such as this one that can change people’s behaviour and promote healthier lives,” Dominello says.

The campaign was designed to impact on cultural values important to the Chinese community, including health, family and financial management. Newspaper and magazine advertisements informed readers that 57 packets of cigarettes is equivalent to a return air ticket to China.

Community Award – Italian Social Welfare Organisation, Wollongong for a documentary series about the significance of the Italian backyard- My Backyard, Your Backyard.

Commercial Small Business Award – Peter Gould Design for establishing itself on the world stage with its creative use of Islamic motifs and Arabic calligraphy.

Advertising and Communication Award – UM (Universal McCann) for a campaign designed to tackle the dangerous rates of smoking amongst Chinese-speaking men.