Carol Morris of UN LTD takes a look at how the introduction of Bohemia Group with the Sydney Story Factory has resulted in a powerful program called Radio with Pictures aimed at helping young people learn to express their feelings in a creative way.

What do you get when you connect a media agency with a creative writing charity for Indigenous and underprivileged kids? You get Radio with Pictures, that’s what.

It is estimated that in Australia over 680,000 young people are considered to be disadvantaged as a result of abuse, neglect, homelessness, illness, trauma and grief.

In a society and in an industry that wields enormous power to make change, these statistics are not acceptable. With a reported 76% increase in child related AVOs (apprehended violence orders) this year, there is a lot that needs to be done to ensure these young people find the support they need.

80% of respondents to the 2014 Media i survey indicated that they want the communications sector to leverage its power and influence to tackle social issues.

Sometimes finding like-minded organisations or individuals that connect with a cause can make the biggest difference.

One of the most recent examples we have of UN LTD connecting a charity with these high-valued assets and skills has been the UN LTD Mentor relationship established between Pip Bingemann, a strategist from Bohemia Group, and the Sydney Story Factory, a not-for- profit creative writing program for marginalised kids who are having learning difficulties.

In connecting the two, we’ve witnessed how the industry can have a commercial and social impact on one of our charity partners in a powerful and effective way.

Through his relationship with the Sydney Story Factory, Bingemann mobilised the entire Bohemia team to connect their collective network of industry contacts – delivering an incredible project with both marketing outcomes for the charity, and a sense of pride and encouragement for the young people whose work is now published for all to see. With this contribution of time and mentoring, and $20,000 cash funding from UN LTD, the collective value is estimated at around $100,000. 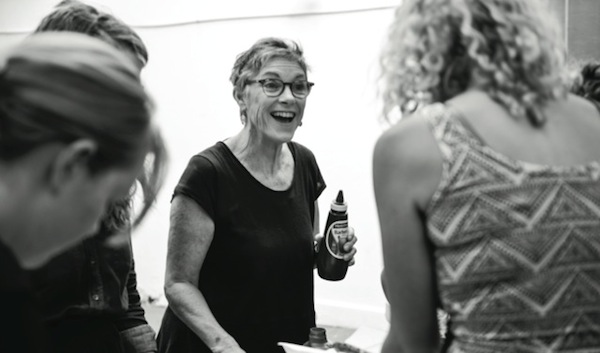 Radio with pictures – calling in industry connections for a great cause

Under the guidance of Bingemann, the Bohemia team put their heads together to work out how they could best support and mentor the Sydney Story Factory. They decided the Radio with Pictures concept was the best execution for Bohemia to get involved with. The media agency would help by pulling together a series of powerful animations by young people, bringing their stories to life and validating their creative skills.

The sole focus for the team at Bohemia was to bring these kids’ stories to life, accessing their industry connections and helping to create a portfolio of creative content to use strategically for investment opportunities and profile building.

From there we saw the Bohemians connect with generous individuals from right across the industry to help illustrate and produce more than 20 animations by young people from Indigenous and non-English speaking backgrounds. A filmmaker was also engaged to document the young people’s creative process, and show the benefits of the program on their communication and collaboration skills, and self-confidence.

The list of contributors from across the media, marketing and advertising industry that came together on this project included: professional illustrators to redraw the kids’ stories, Southern Cross Austereo, which provided its radio studios for the children to record the audio narration, and Audrey Svoboda’s business Dirty Ice Cream to record and produce a documentary of the end-to-end process.

The Bohemia team then called in their events contacts and staged a premiere screening of the animations at Giant Dwarf Theatre in Redfern.

Sydney Story Factory co-founder Cath Keenan said the best part was seeing the kids’ response to their stories on the big screen. The kids loved making the animations and the film night was the first time they’d seen their story told back to them with the professional illustrations and voiceover. Their reaction was priceless and they were clearly very proud of how their ideas had come to life.

The Sydney Story Factory’s programs give children a creative outlet and develop their ability to communicate their thoughts and feelings. The Radio with Pictures project has taken this a step further and enabled them to feel a huge sense of pride in their work. That feeling of confidence is priceless for these students and is such a motivator.

We need to be matching the right mentors with the right charity partners. For that to happen, there has to be an emotional connection between the people giving their time and the cause they are supporting. They have to truly believe in it. The same emotional connection is what we’re building through UN LTD based on our belief that collectively, as an industry all contributing to a common cause, we can really make a difference to at risk young people.

Bohemia and Sydney Story Factory were, and continue to be, one of our ‘perfect match mentor partnerships’, particularly given the fact Bohemia’s company purpose is to create powerful voices.

At the end of the day, all we’re doing is translating people’s personal commitment to the social good into a positive work experience, by connecting opportunities and creating powerful ways for our industry to give back.

Marketing is proud to welcome UN LTD as its not-for-profit content partner. UN LTD is the only not-for-profit philanthropic foundation representing the media, marketing and advertising community, and aims to harness the wealth, talent and influence of the industry, and channel this to support the most creative and innovative organisations that work with at risk young people. Visit unltd.org.au to get involved.

Carol Morris’ career has largely been in the media communications industry. She was agency manager at Merchant and Partners, general manager at UM then executive director of the MFA before joining UN LTD as general manager in early 2013.

Previous Article
Winner announcement: find out who won the year’s membership to Marketing Advantage
Next Article
Aussie research on Internet of Things: operational savings, and productivity and revenue boosts