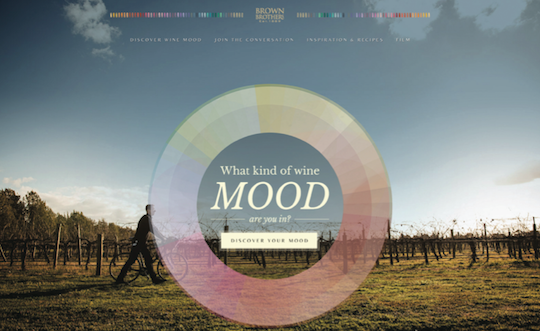 Agencies: Flock of Starlings, Get Started

Brown Brothers is one of Australia’s most iconic family-owned wine companies. Founded in 1889 by John Francis Brown, it continues to be owned and run by members of the third and fourth generation of the family. In 2014, the company celebrated its 125th year in operation. To celebrate this milestone, it launched Colourful Conversations, a multifaceted campaign designed to showcase its full portfolio of wines.

Market research had indicated that most consumers associated the brand with fruity wines. Also, while the much loved brand conjured up feelings of happy nostalgia for long-time advocates, it was struggling to attract new customers.

To really understand the mindset of the wine consumer, Brown Brothers engaged creative brand consultancy Flock of Starlings and embarked on a series of focus groups to better understand how to revitalise the brand. The results highlighted a disconnection between the way wine had traditionally been marketed and actual consumer sentiments.

Through these workshops and other market research conducted by Brown Brothers, the brand realised that typical connoisseur-style tasting notes were simply missing the mark. The everyday wine drinker was less interested in ‘aromas of cherry and rose petal,’ than the mood and occasion they associated with a particular wine.

While the broader objectives of the campaign were to revitalise the brand and reconnect with consumers, on a more granular level it was designed to:

The challenge was to achieve all of this in a way that would amplify a relatively modest budget.

Brown Brothers realised that its strategy needed to be one that turned conventional wine wisdom on its head. It needed to help consumers select wine based on their mood and the nature of the occasion. The strategy needed to move away from traditional ‘wine language’ and inject a bit more emotion into the process of selecting wine. Above all, it needed to highlight the role that wine plays in bringing people together – to frame it as an integral part of the social experience, rather than just a product.

From these insights, Brown Brothers worked with Flock of Starlings to create a mood-based wine selection tool. The concept of a ‘mood wheel’ developed out of the idea that there is a Brown Brothers wine for every mood – and a colour to reflect that wine and mood. The mood wheel essentially formed the basis of the Colourful Conversations campaign.

Armed with the concept of the mood wheel, Brown Brothers brought together a group of experts – including its own PR, events and sponsorship and online teams, as well as designers, writers, a documentary filmmaker and a social media specialist – and got them to produce ideas around connecting people through wine and shared experiences.

From the brainstorming exercise, it was decided to create a dinner party event curated and attended by influential creatives or ‘makers’. Ten makers were selected to take part, including stylists, florists, bakers, artists and chefs. The idea was that they would come together to connect over Brown Brothers’ wine and ‘colourful conversations’.

The unscripted dinner party event was filmed and edited down into a two-minute film, uploaded to YouTube and played in Palace Cinemas. It was also used as the basis for an online behavioural marketing campaign. If people had visited a particular recipe site, for example, they would be served with a web banner that would expand with the film, to drive people to the campaign site.

The concept of the conversation starters was originally conceived to facilitate conversation among the makers at the dinner party, but it quickly became an integral part of the campaign.

The central premise is that Brown Brothers is a company built on questions. The box reads: “With these cards, a glass of Brown Brothers wine in hand and your friends and family around you, you have the perfect elements for a lively, curious and meaningful time together.” 3,000 box sets were created. Consumers could buy the box from the cellar door, or get it as part of a package when they purchased Brown Brothers’ wines online.

Central to the campaign has been its online hub, colourfulconversations. com.au. The site was designed and created by Get Started to bring Colourful Conversations to life digitally. The mood wheel – an interactive tool that allows the user to ‘take the wine mood test’ to see what sort of wine mood they’re in and find a suitable Brown Brothers product to match it – forms the centrepiece of the site. In line with the campaign objectives, it was designed to be fun, engaging and easy to share. The mood wheel has been so well-received that it has now been integrated into Brown Brothers’ main site.

Another key aspect of colourfulconversations.com.au is the digital extension of the conversation starters. Site visitors can view the questions and add their own answers, as well as read through some of the contributions that others have submitted.

The Colourful Conversations concept has laid the foundations for an ongoing communications platform that Brown Brothers plans to use to launch new products.

Each of the makers had substantial social followings. The collaboration between Brown Brothers and the makers was not only to extend the reach of the brand into new consumer markets, but also to collectively create content that could be shared through various social media platforms. This content included photography, recipes and even a series of ‘Make It’ videos that were shared on Facebook and Instagram with useful tips to make an event special.

Magazine advertising in home and lifestyle titles was also used to drive people to the campaign site. The ads, which appeared in publications such as Vogue Living, Belle and Home Beautiful, provided a cost-effective way for Brown Brothers to extend the reach of the campaign. Rather than producing ads, the company created executions that would integrate into the content of the magazines, including recipes and conversation starters.

Colourful Conversations was officially launched on 14 November 2014, to coincide with the reopening of the historic 125-year-old ‘Barn’ at Brown Brothers’ Milawa vineyard. The concept continues to underpin the company’s marketing initiatives and will do so for the foreseeable future.

Since its launch, the Colourful Conversations website has attracted over 140,000 visitors. It has also been a significant referrer of traffic to Brown Brothers’ main website, with 44% of this traffic to date being new visitors to the main site. The campaign website also won Gold in the 2015 Melbourne Design Awards, and it took out the top gongs for both the Commercial and Innovation categories at the Australian Web Awards.

In terms of brand awareness, Colourful Conversations has enabled Brown Brothers to hold its ground in an extremely competitive and crowded market, while numerous competitor brands have declined on brand health measures.

In a broader sense, the Colourful Conversations concept has laid the foundations for an ongoing communications platform that Brown Brothers plans to use to launch new products and tell the brand’s story into the future.