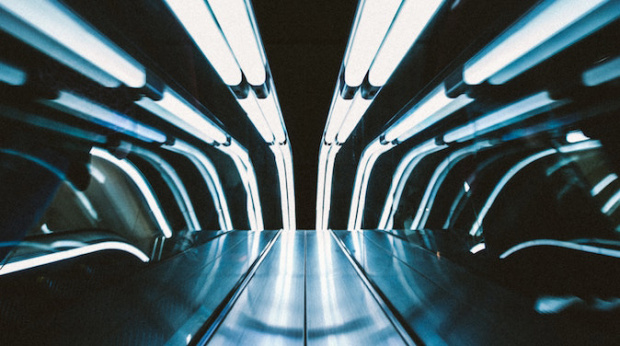 In a changing world, Sérgio Brodsky explains how the future is ours to make and not predict.

In his bestselling book The Black Swan, Nassim Nicholas Taleb tells the story of a turkey who is fed by a farmer every morning for 1000 days. Eventually the turkey comes to expect that every visit from the farmer means more good food. After all, that’s all that has ever happened so the turkey figures that’s all that can and will ever happen. But then day 1001 arrives. It’s two days before Thanksgiving and when the farmer shows up, he is not bearing food, but an axe. The turkey learns very quickly that its expectations were catastrophically off the mark. And now Mr Turkey is dinner.

To make the story more… scientific, see the chart below: 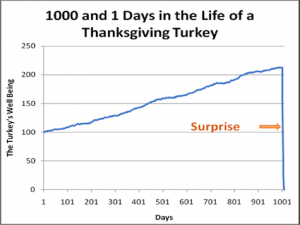 In a recent column, professor Mark Ritson urges us to be turkeys and labels marketing writers with a different view, “arsehats”.

Just as Ritson exposed untrained marketers for setting their annual budgets – not from base zero – but from nonsensical extrapolations from previous years, shouldn’t we also question extrapolations from past crises when projecting the possible effects of the current one?

Disclaimer. I am one of the lucky people that took Ritson’s mini-MBA in marketing and not the ninja, guru, growth hacker and the other folkloric characters animating our industry. So I’m a trained marketer. Unlike the professor, I do not have a PhD in marketing but took a detour to learn about strategic foresight. Before you ask… no, the course material did not include a cape and crystal ball. Lastly, I view professor Ritson as the voice of reason in an industry contaminated with horse shit. But I also have my independent views and this is one.

As explained by the Institute of Security Studies, an agency from the European Union: “[Strategic] foresight is really about: choice, decision and action – and not prediction, as is often assumed.”

With that said, let’s park the temptation to predict anything here. Let’s instead discuss choice, decision and action. In this unique historical moment, brands have an equally unique opportunity to choose how to behave and, therefore, mean something more to people. After all, that’s what brands are… a layer of meaning on top of otherwise meaningless commodities. Or, simply put, brands are metaphors able to create all sorts of associations in our minds – what professor Byron Sharp nicknamed “memory structures”.

Essayist Anaïs Nin famously said: “We don’t see the world as it is, we see as we are.”

We are a reflection of the metaphors in the stories we tell ourselves. Beyond poetry, the metaphors we choose to use can significantly impact people’s perceptions in ways that have real-world consequences.

For instance, there is evidence that even the briefest exposure to the Apple logo makes us more creative. This is because that bitten apple is a metaphor for creativity or, as stated on the brand’s slogan, your choice to “think different”. Further, our emotions – also understood metaphorically – can actually change the shape of our hearts in response to grief or fear and literally break in response to an emotional heartbreak.

The impact of metaphors is not reserved to the present only. According to professor Sohail Inayatullah, UNESCO’s Chair in Futures Studies: “Metaphors present themselves as the main causation drivers of the future.”

When it comes to the current pandemic, war has been the metaphor of choice and structured under the hero’s journey archetype. In narratology and comparative mythology, the hero’s journey is the common template of a broad category of stories that involves a hero who goes on an adventure, and in a decisive crisis wins a victory, and then comes home changed or transformed. What a great opportunity to showcase heroism by waging war against COVID-19!

From world leaders to commercial brands, our media has been flooded by the ‘war’ lexicon, even though there has been no military confrontation or actual fighting. The Chinese premier Xi Jinping swore to wage a “people’s war” on the coronavirus. US President Donald Trump described himself as a “wartime president” of a country that is fighting a “war” against what he called the “Chinese virus”. Likewise, Indian Prime Minister Narendra Modi, while talking about the 21-day national lockdown, invoked the imagery of an 18-day battle from the Hindu epic Mahabharata, saying that India aims to win the “war” against the coronavirus in 21 days.

Recent brand promotions – about things done and about nothing done – have mainly followed the chest-beating tone of the hero’s journey archetype.

In a call-to-arms promotional piece, Burger King rallies the entrenched “couch po-ta-triots” to make orders through the Burger King app and in exchange have delivery fees waived. As a ‘salute’ to those on the ‘frontline’ ‘fighting’ the COVID-19 pandemic, Burger King also gave away 250,000 Whopper sandwiches to nurses in the USA and ‘saved the day’ by contributing with donations to the American Nurses Foundation Coronavirus Response Fund and encouraging audiences to do the same.

Burger Hero… oops, I mean King, may also be the canary in the coal mine supporting professor Ritson’s bet that everything will be the same again. That is a problem.

Linguistically, the ‘war’ analogy is a tool to convey the gravity of the crisis and equally useful to marshal resources and galvanise people fighting the pandemic. However, the ‘war’ metaphor can become a convenient alibi for powerful political leaders to use the situation as carte blanche to adopt draconian measures with scant regard for humanitarian issues or civil liberties. For instance, Prime Minister Modi’s announcement of a 21-day national lockdown, with just four hours’ notice (compare this with the Singaporean Prime Minister announcing a one month lockdown with four days’ notice) led to a humanitarian tragedy of mass exodus of migrant workers.

Also, in media studies, ‘mediatisation’ is a theory that argues that the media shapes and frames political conversations as well as the society in which that communication takes place. Consequently, institutions and whole societies are shaped by and dependent on mass media. This means that if we want the outcome of this crisis to be different from previous ones (i.e. a return to a less-than-optimal normality), we need new narratives and metaphors able to project a more desirable future.

Interestingly, archetypes (like people and civilisations) can also be organised in terms of developmental stages. To continue using the hero’s journey boyhood narrative, would be to continue accepting the illusion (or as professor Ritson would say, “a pneuma”) of a Pax Romana. The more developed and mature alternative is the King archetype, with a narrative focused on collective success, being of service and, ultimately, leaving a legacy for the greater good.

In the Disney animated film Moana, the goal of the plot is to restore the heart of the island goddess. The main characters in the story are not trying to defeat anything, they are trying to restore the goddess’ heart – a metaphor for natural balance. And, when they do, she turns from an angry fire monster into a peaceful green island.

To that end, the city of Amsterdam has formally embraced the ‘Doughnut Economics’ model, a breakthrough, holistic alternative to the destructive, growth economics employed over the last few centuries. In Spain, progressive steps are being taken to the implementation of an universal basic income. Princess Sofia of Sweden is now volunteering to clean and cook at a local hospital, having exchanged her royal attire with a white and blue uniform. Brands like Burberry and a few others have also adopted kinglier behaviours, without the need of heroic campaigns to promote such actions.

See below a statement on Burberry’s website about its efforts in relation to the pandemic:

Signs of change are already visible. It does not mean these will persist following the crisis. To avoid a return to our suboptimal normal – including, but not limited to, extreme social inequality, climate change, scarcity of resources and the Kardashians – leaders from all areas of society must shift the metaphor framing their narratives and, in turn, their actions.

This starts by answering how they want to be part of a larger whole and in service of that. There is no precise response to ‘what our society wants to become’, but that is the question to be asked. Asking the question does not remove the responsibility of every marketer to make money for whatever brand they may be working with at any point in time. Nonetheless, asking the question also allows any of us to avoid repeating unwanted patterns.

The fundamental lesson from Strategic Foresight is that the future is ours to make, and not predict.

Asking the question will also encourage the many marketing strategists out there to look beyond, onto the many other domains that make the profession so interesting. From evolutionary psychology to anthropology and even the narratology of archetypes, there’s plenty to enable new models able to fix the problems from the past, while cashing in for that.

Colin Mayer FBA, Professor of Management at the Saїd Business School at the University of Oxford, along with the British Academy, have been leading an ongoing research project about ‘The Future of The Corporation’, aiming at understanding how business might be able to solve the problems it created. In Mayer’s view it begins at redefining the very purpose of business as “to produce profitable solutions to the problems of people and planet, and in the process, it produces profits”.

The future can be reshaped if we are willing to reframe our past and present hard enough, both literally and metaphorically. No need to be a hero either, that would be a big fucking pneuma. But, if a bit of left field thinking and doing can prevent myself and those around me from becoming the Thanksgiving turkey, I’ll gladly continue to do so.

BY ON 21 April 2020
Sérgio Brodsky (L.LM, MBA) is an internationally experienced brand strategist, a marketing lecturer at RMIT and chairman at The Marketing Academy Alumni.
He is passionate about cities and culture and the role of brands and technology in society, an intersection from where he drew inspiration to conceive a radically innovative approach to brand communications, he coined Urban Brand-Utility.
Connect with Sérgio on www.sergio-brodsky.com or through his Twitter handle @brandKzarglobal brand strategy and innovation. Follow him on Twitter: brandKzar.

« A great PR brief is not about what you wantCan personalisation and privacy coexist? »