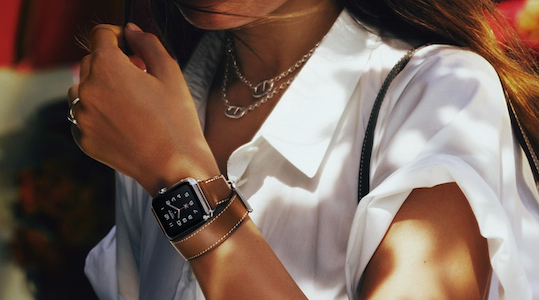 A partnership with exclusive fashion goods designer Hermes is among Apple’s string of new product announcements from its press event in San Francisco overnight.

The new Apple Watch Hermes Collection is available with three options for bands and a customisable watch face with three exclusive dial designs that feature the Hermes brand.

Starting at $1700, the new watches cost more than double the price of the standard Apple Watch, which is $799; while Apple Watch Sport starts at $499.

Some of the materials used in these watches include fauve Barenia leather, noir box leather and capucine Swift leather, while each stainless steel case features an etching of the Hermès signature.

Apple chief design officer Jonathan Ive explained the two brands were suited to the partnership due to their “deep appreciation of quality design”, despite making “very different products”.

“Both companies are motivated by a sincere pursuit of excellence and the desire to create something that is not compromised. Apple Watch Hermès is a true testament to that belief.”

“What more contemporary and relevant expression of this principle could there be than this collaboration with Apple. We are strongly united by the same deeply held ideas and principles. I see it as the establishment of an alliance in excellence; like horse and carriage, a perfect team.”

The ordinary Apple Watch has a new series of cases and bands, including gold and rose gold aluminium Apple Watch Sport models.

WatchOS 2, the new operating system will arrive as a free update on 16 September, including:

The all-new Apple TV will bring “a revolutionary experience to the lounge room”, including TV-specific apps, touch screen and a voice-controlled Siri Remote.

“There has been so much innovation in entertainment and programming through iOS apps, we want to bring that same excitement to the television.”

The iPad Pro’s new features show Apple has “got serious about making its mainstream products powerful enough for professionals”, from businesspeople to photographers to gamers, Josh Constine summed up on TechCrunch.

New features in the latest iPhones include:

Philip Schiller, Apple’s senior vice president of worldwide marketing said: “The only thing that has changed with iPhone 6s and iPhone 6s Plus is everything — 3D Touch lets users interact with iPhone in entirely new and fun ways, and the innovative Live Photos brings your pictures to life.”