Infographic: The ups and downs of retail in 2012

Infographic: The ups and downs of retail in 2012 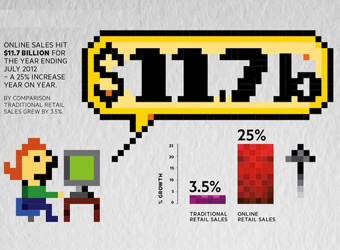 Earlier in the year, we tracked the ups and downs of online retail against ‘traditional’ retail in the infographic below.

2012 was a year of fluctuations for online retail, with growth peaking near 30% in February then dropping to below 20% in April, before recovering to 25% in July. The last recorded data from NAB’s Online Retail Sales Index, collected in October (after this graphic was published), growth was steady at 26%.

In contrast offline retail sales growth languished at sub-5% levels all year, with some months recording decreases. In November, the more recent run of ABS retail trade figures, there was no change in sales month on month.

Online shoppers spent the lion’s share of their outlay on auction sites, department stores and fashion retailers throughout the year. In July, toys and media retailers were the second largest segment of the online markets, while household goods and electronics was the third largest.

Tellingly, as of earlier in the year, if the top 15 online retailers in Australia were a single entity, they’d be bigger than Myer and David Jones and almost on par with department store market leader Big W, according to analysis from data analytics firm Quantium.