Houston, we have a… party? Mumm pops the cork on zero-gravity champagne

Houston, we have a… party? Mumm pops the cork on zero-gravity champagne 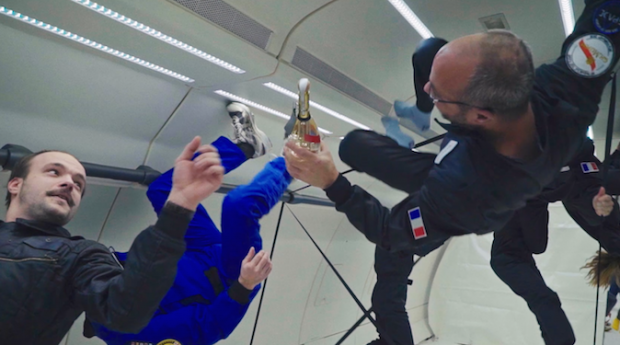 What has this space design agency been focusing on for the past three years? Finding life on Mars? Interplanetary communication? Nope. Space champagne.

Imagine you’re floating in an endless expanse of blackness, marvelling at the impossible feats of human creation and the ever distant boundary separating you from forever. Suddenly you’re interrupted by a thought, ‘man, I could really go for a glass of bubbles right now.’ Maison Mumm has you covered.

According to Mumm, there will be five million ‘space tourists’ by the year 2030. The champagne brand is trying to get ahead of the market with its launch of the ‘Mumm Grand Cordon Stellar’.

Mumm says the new bottle is the result of a three-year partnership with space design specialist agency, Spade.

“For the last 40 years, space travel has been shaped by engineers rather than designers. Instead of seeing zero gravity as a problem to be solved, we look at it as a design possibility,” says Spade founder, Octave de Gaulle.

“The big design challenge for Mumm Grand Cordon Stellar was actually getting the liquid out of the bottle.”

Astronauts beware, drinking space champagne appears to be a different experience entirely from its earthly counterpart. Instead of ‘pouring’ champagne, the Cordon Stellar ejects a small portion of champagne foam to be caught in the specialised accompanying glass that resembles a golf tee.

“It’s a very surprising feeling,” explains Mumm’s cellar master Didier Mariotti. “Because of zero gravity, the liquid instantly coats the entire inside of the mouth, magnifying the taste sensations.”

Mumm says Cordon Stellar will soon be offered on Novespace flights – an Airbus A310 performing parabolic manoeuvres to simulate the experience of weightlessness. However for those keen to experience zero-gravity, a bit of saving may be in order. The cheapest flights offered by Zero-G Novespace go for €6000 or AU$9344.

“By rising to this new challenge, Mumm defies gravity and once again pushes the limits of innovation. This revolutionary bottle illustrates the Maison’s status as an icon of the avant-garde,” says global brand director at Mumm, Louis de Fautereau.

BY ON 14 June 2018
Josh Loh is assistant editor at MarketingMag.com.au

« Roger Federer to slam 24-year sponsorship with Nike for Uniqlo deal?SCA tries to save the jingle by remixing ’80s SPC ad »