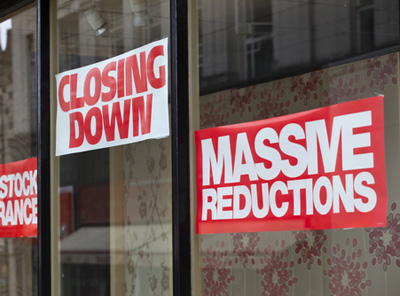 The Christmas retail figures are in and the news is not good for retailers. In a month that usually sees month-on-month growth, retail figures dropped, albeit marginally, in December placing even greater pressure on the country’s beleaguered retailers.

While the Australian Bureau of Statistics’ (ABS) Retail Trade figures for December represent a year-on-year increase of 3.0%, they show that Australian retail turnover fell 0.1% compared to November.

According to the ABS, the largest contributor to the fall was food retailing, which fell by 0.7%, followed by cafes, restaurants and takeaway food services (down by 1.8%). These falls were offset by rises in clothing, footwear and personal accessory retailing (up 3.5%), department stores (up 1.1%) and household goods retailing (up 0.2%).

The Herald Sun reported that the fall went against expectations held by the Australian National Retailers Association (ANRA) of a 0.5% increase.

CEO of the ANRA, Margy Osmond, told the Sun: “I think we’re now starting to look at some very dangerous territory in terms of retailers having to close their doors and perhaps a significant loss of jobs.”

“If we see these same levels of consumer spending coming into this year, it’s going to mean jobs in the sector, there’s no doubt about it.”

The fall comes despite interest rate cuts from the Reserve Bank in both November and December board meetings, taking the rate down from 4.75% to 4.25%.

Tags:
Previous Article
Coach the coach: The importance of mentorship and guidance
Next Article
Top10 ads of Super Bowl 2012