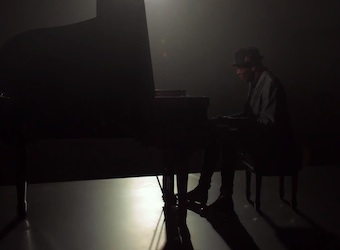 The Commonwealth Bank has launched the latest part of their ‘Can’ campaign based around musician Steve Clisby’s life-long love of music and his perseverance to achieve his goals.

Clisby performs a specially written song for the campaign called ‘Three Little Letters’ – which, in a statement released yesterday, the Bank describes as: “Reinforcing the ‘Can’ philosophy and reflecting the story of Steve’s life-long love of music and his perseverance to achieve his goals.”

Commonwealth Bank’s ‘Can’ positioning was launched in May 2012  featuring the poem ‘Ode to Can’, read by Toni Collette. The campaign is aimed at empowering and inspiring customers – both individuals and businesses – to move forward in their financial lives. This latest chapter of this campaign continues the momentum with the lead campaign thought: ‘When you believe you Can, you Can.’

‘Three Little Letters’ is a based around Clisby’s  personal story – from being a six year old who, inspired by his mother’s record collection, taught himself to play the piano and saxophone, to performing on the world stage and playing alongside Tina Turner and Jimi Hendrix. 67-year-old Steve went on to become a finalist in the 2013 series of The Voice.

“From being greeted by our concierge in-branch, conversations with our dedicated employees over the phone, to the new technologies on offer, which make everyday banking simpler for customers – the sentiment of Can underpins every interaction we have with our customers.”

“Steve’s story of perseverance and consistently striving towards his goals personifies the Can philosophy. Over the years he repeatedly told himself ‘I can achieve my dream’, and that’s what he continues to do. We hope Steve’s story and our latest campaign encourages our customers to pursue their goals, and work towards their financial and personal aspirations,” Shortt says.

Clisby says the sentiment of the Can campaign is something he has related to throughout his career.

“The ‘Can’ philosophy is a commitment to continually working towards your goals. Throughout my career there have been times when I considered giving up, but with positivity and hard work I managed to persevere through the tough times and achieve things I never would have thought possible. I’m proud to be working with CommBank on the ‘Can’ concept which so closely mirrors my own life story,” Clisby says.

The campaign launched last night (Sunday 13 October) with a 60-second and 30-second TVC that will air across all free-to-air and pay TV networks. It will also be supported by OOH, digital video and cinema advertising.