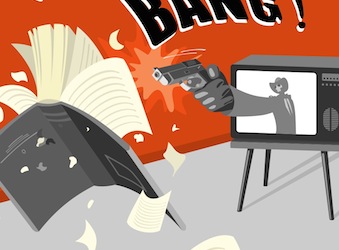 A great creative demarcation is underway, and consumer pop culture 2.0 is up for grabs. Advertising agencies that want to survive, writes Steve Sammartino, need to understand that the war won’t be won with the weapons of yesteryear.

I grew up in a world where advertising was regarded as the most creative industry of all. When the television entered the family room the advertising industry managed to redefine commerce and pop culture in the blink of an eye. To be fair, advertising was not a new concept during the 1950s, but they were among the first to adopt the new form of technology and they rode that curve for the best part of 50 years.

The net result of advertising’s ability to tell a 30-second narrative and run campaigns should not be underestimated. The industry managed to leverage the social nature of our species. They told stories which created perceived acceptance and success among peer groups. It was the greatest anthropological hack of all time. Plenty of people and organisations became both rich and household names under it. Advertising became the place to be for the creative type, the life hacker. It was well paid, difficult to get into, and provided a working environment to be envied.

What people forget is that the idea of TV and mass advertising was a rapid adoption of technology with big financial risks attached. The advertising agencies and the clients both ‘paid it forward’ for the profits they knew it would deliver tomorrow. It’s not too dissimilar to what we’ve seen on the web in the past 15 years: rapid technology adoption creating new cultural and commercial forces. It’s a redefining of consumer behaviour, but this time the advertising industry is a clear laggard.

In fact, the advertising industry at large got lucky with social media. Advertising agencies were slow to adapt. Maybe they thought it would blow over, like the late 1990s tech bubble did and we’d get back to business as usual, 30 seconds at a time. The lucky part was that the clients thought this too. The large industrials (read: big ad spenders) were even further behind on the social media learning curve than legacy advertising agencies. And so together they fumbled, missed opportunities and opened the door for digital agencies, but they both survived the upheaval. And slowly they’ve adapted to the new market modalities. Advertising got lucky in the fact their clients wanted to resist emerging trends as well, and this gave them time to adapt.

Will advertising be lucky a second time?

This is not at some point in the near future either, it is already here. The story at the Cannes Lions Festival in the past two years have been telling. Multiple entries and wins from technology firms including Google and Lions awards to IBM. The advertising playbook shows a clear shift. A shift from informing, persuading and entertaining, to connection, technology, and utility. Which can equally have an emotional impact on people.

Yes, big boring brands will continue the need for old school interruption advertising, but the space will become more competitive and less profitable for client and agency alike. If advertising wants to stay lucky, then it’s time it does what most newspapers and legacy media conglomerates failed to: redefine how connections are made and make sure it understands and controls the tools to make the connections.

In fact, knowing about them isn’t enough, it needs to be able to build them too. Advertising and media agencies need to become consumer technology firms. The firm that connects the pieces of seemingly disparate technology. A firm which connects brands to people with tools of technology. That is now the job of the advertising agencies who want to survive.

Given that advertising agencies are a labour-oriented business let’s compare the two types in regard to creative talent.

It must be said that the creative industry mantle has been handed over to technology and startup firms. This is where the young creative minds of today want to go work. And who wouldn’t? They are changing the world and their campuses look like Disneyland with free organic food restaurants and share options being handed out like lollipops. Sure, this is a function of profit, but it also attracts a talent cycle, which can then maintain it. A great creative demarcation is underway, consumer pop culture 2.0 is up for grabs. It’s hard to see the war being won with the weapons of yesteryear. And when you can’t beat them, the only choice is to join them.