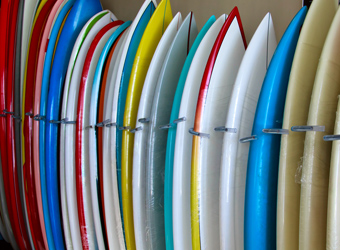 By Andrew Warren and Chris Gibson, University of Wollongong

It has been well publicised that the big three surf labels – Rip Curl, Quiksilver and Billabong – have experienced shrinking sales and expanding debts. Suburban consumers have turned away from expensive surf-branded apparel. Coupled with the rise of online shopping, doubts are growing about the future viability of corporatised surf brands.

Raw economics certainly matters to the surf industry. The big three surf brands have been hit hard by recession in the United States and Europe, where they have concentrated most of their retail investment. Their timing was terrible. Just before the GFC, Quiksilver and Billabong both expanded their business operations. Billabong bought up a substantial number of surf retail outlets. Quiksilver acquired, and has since had to sell, a series of non-surf leisure brands – including Rossignol skis and Cleveland Golf equipment. Expansion added huge debts, which became difficult to finance when retail returns evaporated.

We think the problems facing the big three can also be explained through understanding surfing subculture. From informal beginnings shaping boards in backyard workshops and tool sheds, the selling of the surf remains strongly influenced by subcultural values and fashion cycles within the surfing scene.

In our new book on the surf industry, to be published next year by University of Hawaii Press, we make the point that, like music, it is a subcultural industry defined by a tension between “major” corporate labels and smaller “independents”. Independent labels have more credibility because they are considered closer to the grassroots of surfing culture. They are often based in specific surf cities and regions – southern California, the Gold Coast, north shore O’ahu – where surf subcultures are strong.

When brands grow and expand, they take on the character of corporate enterprises. The listing of Quiksilver on the NYSE in 1998 and Billabong on the ASX in 2000 signalled abrupt changes to the existing structure of the surf industry. Rightly or wrongly, many surfers felt that profitability and capital growth became more important than fulfilling surfer’s needs and desires. Surf companies have up-scaled production, acquired smaller brands, opened flagship retail stores and supplied stock to department stores. Quiksilver now supplies their surf-wear to department chain Macy’s in the United States and David Jones in Australia. Increasing market share is the goal, to pay shareholders dividends. Brand visibility to the masses is everything. But this undermines the claim to service local roots and the needs of every-day surfers.

The marketing of surfing’s cool image has allowed companies to sell the surf to a wider range of consumers. Despite its inland geography, in 2010 the US mid-west region was worth a remarkable $457 million in surf retail sales. The trade-off is that selling surf-wear through department stores undermines scarcity and subcultural value. Brand credibility falters.

This is not new. In the 1960s surf, labels Ocean Pacific and Hang Ten successfully diversified from surfboards and board shorts into different types of surf and swimwear. Yet in the 1980s, when their products moved out of surf shops and into department stores, subcultural affiliation collapsed. The big three now appear to be heading in the same direction.

When scarcity value is lost, other independent labels fill the niche. They look much more authentic and responsive by comparison. Their surfboards, clothes and apparel are harder to find, raising scarcity value. Independent brands appear rooted in surfing cities and regions. Corporate surf firms, by contrast, appear placeless and “uncool”. In time, the “majors” swallow up newer, smaller “independents” (as happened with RVCA, Palmers, Dakine and Von Zipper), temporarily leveraging their street cred. But the cycle starts all over again.

While the big three surf brands clearly face hardship, it is wrong to assume that all three are the same, or are equally doomed. Quiksilver and Billabong are listed companies. Responsibilities to shareholders and investors will influence future business planning. Any restructuring of Billabong and Quiksilver, or recapturing of their subcultural cachet, is unlikely to involve winding back stock from department store shelves. The recent appointment of former Target CEO Launa Inman as head of Billabong confirms this.

Rip Curl, on the other hand, remains privately owned. Whether this grants more flexibility to maintain ways of doing business that retain credibility and profitability is moot. Nevertheless, Rip Curl maintains a stronger strategic focus on surf “hardwear”: wetsuits and surfboard retail. Despite a dramatic fall in the last 12 months, Rip Curl remains profitable.

Broader economic conditions have gutted the performance of Australia’s largest surf brands. But macroeconomic conditions do not explain the full story. Surfing is a subculture, not an anonymous market for run-of-the-mill consumer goods. Given Australia’s strong connection to surfing, demand for surf products and equipment will endure. Newer, edgier brands will emerge and compete for market share. Whether the big three Australian firms can adapt and maintain their connections to surfing subcultures will be interesting to watch. Beyond the shopping mall, the key to understanding surf capitalism is watching the unfurling logics of its subculture.