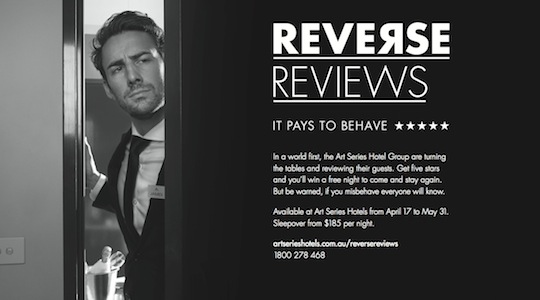 Hotel staff will review their guests as part of Art Series Hotel Group’s latest campaign, reversing the review culture that websites such as TripAdvisor have created.

People staying at any of the six Art Series hotels around Victoria between 17 April and 31 May can opt in to participate in the ‘Reverse Reviews’ program for a chance to earn rewards.

Staff will post reviews of guests online, using a point system to rank their behaviour and demeanour. Guests who score four or five stars can receive complimentary stays, upgrades, food and drink.

“More than 60% of our penthouse stays are already deriving from upgrades and ‘comps’, so now we’re looking at rewarding our best customers in a more formal and structured way.

“We are really proud of our review results and it’s no secret that hotels are incredibly competitive on these sites. We think our guests will respond in the same way.”

“They are always looking for Avant garde ways to express their brand, whilst engaging their guests in interesting ideas. Working with Art Series Hotel Group is always exciting.”

Last year the group launched a campaign aiming to encourage visitation across all six of its hotels by giving away a world trip to a guest who ‘collected’ all six hotels and posted about their stay on social media.

The group is also famous for its award-winning ‘Steal Banksy’ and ‘Overstay Checkout’ campaigns.

Four of its hotels are located in Melbourne; Prahran, South Yarra, Parkville and St Kilda Rd; and the others are in Bendigo, Victoria, and Walkerville, South Australia.

READ: Art Series Hotel will send someone around the world for staying in all six hotels »

The ‘Reverse Reviews’ campaign is backed up by results from a survey of 1054 people conducted by Galaxy Research, which revealed some interesting insights about hotel guest behaviour:

The survey concluded that the perfect hotel guest, least likely to participate in anti-social behaviour, is a woman over 50 from Perth, married without children who either doesn’t work or works a white-collar job and earns an income of more than $40K.