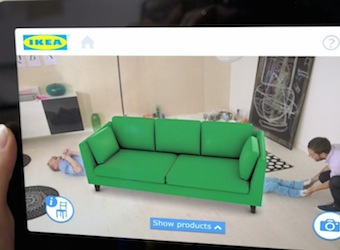 It represents a huge opportunity for publishers, Francis said, pointing to the ability to sell the same ‘above-page’ ad space multiple times by activating different creative in different locations.

“One cover that goes out Australia wide can launch different augmented reality depending on where they’re activating it by putting geo-fences around it,” Francis explained .

“Suddenly it opens up your magazine to so many small to medium enterprises that could never afford to be in your magazine before, by contextually overlaying content depend on where you are.”

AR executions have been trialled locally by brands like Domayne, Mirvac, McGrath, Cisco and McDonalds in the Cannes-winning ‘Tack my Maccas’ campaign, but Australian marketers have been slow to the table.

Francis believes its uptake is being stunted by a lack of understanding and aversion to risk. “Creatives and agencies don’t understand the technology enough to conceive campaigns,” he said.

By turning inanimate creative into a user interface, advertisers can give consumers an experience that is more memorable, personalised and contextual, Francis said.

Typically measured by views, dwell time and interactions, it can provide advertisers with insights like preferences based on location. For example, do residents of a particular suburb prefer a certain colour when choosing a new car.

Francis said the download of the app required to activate AR did not represent a significant barrier to consumer trial.

“Consumers are getting used to navigating the real world with their phones,” he said. “If the reason is compelling enough, they will download and activate the ads.”