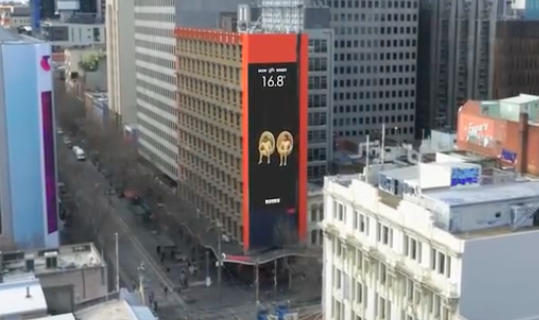 Bonds has dropped the latest chapter in ‘The Boys’ men’s underwear campaign, a large interactive billboard in Melbourne.

The seven storey high billboard will see ‘the boys’ react to the weather via a live RSS feed – shrinking in the cold, descending in the heat and swaying when it’s breezy, and delivers the tagline ‘your boys go through a lot, they deserve very comfy undies.’

“There’s a lot your boys have to go through and that includes changing climate during the day. So we designed a billboard that not only displayed the weather, but also showed men how their ‘boys’ would be affected,” says Clemenger BBDO Melbourne creative director Ant Phillips.

“While we pioneered a technology more than two years ago to serve up advertising based on average temperatures, this campaign takes it to a whole new level using live RSS feeds. Through our ability to innovate and Clemenger BBDO’s excellent creative, the campign will drive much greater consumer engagement than previously possible.”

The campaign has taken a number of Campaign of the Year Awards, and boasts success in getting Australian men talking and thinking more about their choice of underwear, and earned media attention and impressive view counts.

A baller move or just plain nuts? Decide for yourself, here’s ‘The answer, my friend, is blowing in the wind’ campaign video:

And the latest in the online video campaign, ‘Cycle’: