The team at Marketing magazine had been cleaning up their desks in preparation for a big 2012. Thus, I was handed this book (UnMarketing by Scott Stratten) which I read via Kindle when it was first released about a year or so ago but I suspect the hardcover has only belatedly been released here in Australia.

A year is a long time in today’s social media-driven marketing industry so upon re-reading UnMarketing I found there was a fair bit of stuff that, while not strictly outdated, is well-worn. If you’re someone who keeps up to date with the social web and the role it plays in today’s marketing, you might find it’s a case of ‘been there, done that’.

That aside, UnMarketing is a pretty cruisy and enjoyable read for two key reasons. Firstly, Stratten writes in easy-flowing conversational style which is always a plus, and secondly, the book contains a lot of bite-sized chapters that allow the reader to dip in and out at will. I don’t know about you but I sometimes like to read chunks of a book, spark some thinking, and then put it back on the shelf again. 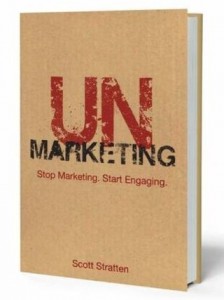 The fact Stratten has called his book UnMarketing probably gives you a pretty good indication of his philosophy in terms of marketing. He’s anti-‘push-and-pray’ marketing (“The same tired methods”) preferring to build relationships with customers, especially via social media engagement. “If you believe business is built on relationships, make building them your business,” he writes.

“Marketing happens every time you engage (or not) with your past, present and potential customers. UnMarketing also takes it one step further – it is any time anyone talks about your company.”

Great for the small business

Hence, if you’re at the smaller end of the business spectrum (or a trusted advisor/solopreneur-type), you’ll probably dig many of Stratten’s tips, stories and practical advice. He’s a passionately scrappy, street (and web) savvy entrepreneur with lots of yarns to tell.

However, if you operate at the bigger end of town, you may struggle to find relevance with your business. It’s not that what Stratten says is wrong – far from it – it’s just that a lot of the tactics and strategies he writes about are easy for the smaller business to implement but bigger enterprises aren’t necessarily geared for ‘micro’ engagement-focused marketing activities (they should be, but the reality is one-way broadcast of messaging is going to dominate the ‘big brand’ landscape for some time to come).

If you are a marketer at the big end of town, books like UnMarketing are important as they paint an accurate canvas regarding what’s happening at a grassroots level.

One criticism is that Stratten tends to bounce around a lot. Across four consecutive chapters for example, he variously covers best-selling books (a rant at best), the perils of revealing too much if you work from home (‘Why Being a Work-at-Home Mom is Bad for Business’), Walmart’s corporate policy (and lack of customer experience), and ‘Idea Creation’ (how and why to create great content). Pretty diverse, eh? Doesn’t worry me overly because, as I say, I don’t mind dipping in and out of books like this. But more structured-thinking people might get a tad annoyed :).

Scott Stratten will appear in Australia at the Get Schmart conference, held 21 February in Melbourne and 23 February in Sydney.