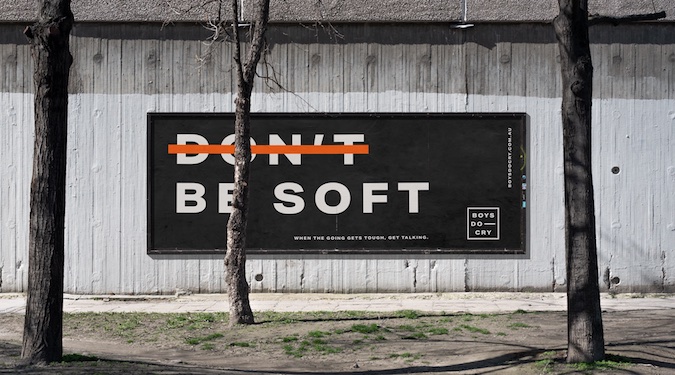 The past week has seen the launch of the nationwide Boys Do Cry campaign, with the central tenet of the campaign a rework of the famous ‘Boys Don’t Cry’ song by English rock band The Cure.

The music video accompanying the song sees a choir of 30 men from diverse communities singing in a circle, challenging traditional masculine stereotypes, and encouraging guys to reach out for help and check in on their mates.

Created by advertising executive Simon Lee of The Hallway, the campaign involves the video, posters, ads and a website, and challenges the stigma that manning up is about controlling your emotions. Instead it encourages men to be vulnerable with their emotions and that strength is found in coming forward and speaking about it, not holding it in.

The initiative is in partnership with mental fitness foundation Gotcha4Life and the University of Melbourne, with support from media, marketing and creative social purpose organisation, UnLtd and media agency Initiative. A banner campaign featuring the campaign line ‘When the going gets tough, get talking’, will launch with the video.

The song has gone viral, and was retweeted by The Cure’s frontman Robert Smith, with online reaction overwhelmingly positive regarding the song and its message. Lee says they have received messages from as far as Venezuela, Portugal and France, alongside expressions of support from across Australia.

Lee believes the truth, authenticity and vulnerability on display in the video is what has resonated with the audience. He says there is huge power in seeing men express their vulnerability, found not only in the words they are singing but the manner in which they are doing so.

“The men who came together to form our choir revealed their authentic selves, so they appear not as performers or actors, but relatable human beings, just like our audience,” he says.

“There is a natural connection between the choir and the audience because they are cut from the same human cloth.”

In the past 12 months in Australia, 2384 men have taken their own lives. This makes suicide the leading cause of death in men aged 15-49. One in eight Aussie blokes will experience depression on average, and one in five will experience anxiety at some point in their lives.

Professor Jane Pirkis from the University of Melbourne’s Centre for Mental Health researchs male suicide prevention and provided advice on the campaign. She said the impact of the campaign has been profound already, with their preliminary findings positive.

“The boys and men who saw it said they were more likely to seek help than they would have been at the beginning [of the video],” she says.

A central figure in the song is East Kimberley Noongar man MC Dallas Woods, who put his rapping talents to work in the song, and told Triple J Hack the most important part of the campaign for him was to encourage men to show up for their mates when something is wrong, and lead them to getting professional help.

“Instantly we all become therapists, we’re like, ‘alright, cool, let’s go to the pub’… but really, it’s not getting down to the point,” he told Hack.

“We need to be able to lead him in the right direction towards the actual people that can help, you know, to an actual therapist [who’re] actually trained to handle people’s emotions”.

Simon Lee says the entire project has alerted him to the power and potential of advertising in this space.

“This has opened my eyes even further to the real value advertising could have in the world if more commissioners and creators expanded their effectiveness criteria to include a measure of the impact (positive or negative) that campaigns have on societal, ecological and personal well-being,” Lee says.