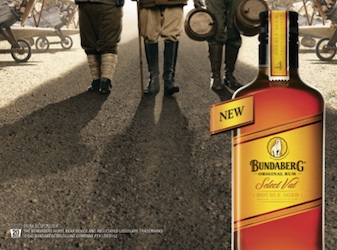 There aren’t many Australian brands that have enjoyed a 125-year history, but this November marks the anniversary of Bundaberg Distilling Company first producing a liquid that, since 1888, has gone on to become an Aussie icon and, with overwhelming dominance of the local spirits market, it has plenty to celebrate.

This year marks the 125th anniversary of the Bundaberg Distilling Company, and the iconic Queensland brand, Bundaberg Rum, or ‘Bundy’, is looking pretty good for its age. It’s responsible for almost

85% of all rum sales in Australia; almost one million Bundaberg drinks are sold every single day. It is without question the biggest stand-alone brand in beverage giant Diageo Australia’s range, and is referred to as ‘the prized jewel’ of the company’s portfolio.

The distillery at Bundaberg was established when a group of sugar millers met in 1885 to decide what to do with the waste molasses from the region’s abundant sugarcane farms. Difficult to transport, molasses is good for little else, so the decision was made to distil it into rum. With a capital of £5000, the original board of directors saw the first Bundaberg rum produced in 1888.

The distillery still occupies the original site, but the business side of things, and the numbers involved, have changed dramatically. Bundaberg Rum has been under Diageo’s stewardship since 2000. The British drinks giant currently controls 26% of the $507 million Australian spirits market and rum makes up a hefty 38% of that market, according to industry reports by IBISWorld, when bottled and ready-to- drink variants are combined.

Andy Oughton, marketing manager, rum, leads marketing efforts for Diageo’s rum brands in Australia. That means, largely, Bundaberg. Oughton says that although the Bundaberg brand has taken various forms over the years, being distributed under various labels and marketing campaigns, the core values of the brand return to its founding fathers.

“It always comes back to that strong brand based on the ingenious creation of this handful of very clever sugar millers back in the day,” he tells Marketing.

With Bundaberg Rum already the most successful Australian spirit on the market, both as an export and domestically, the new brands are expected to encourage a segment of drinkers to try spirits for the first time, and raise rum’s share of the spirit market even further.

The introduction of these new ‘highbrow’ products within the Bundaberg range raises the question: is Diageo trying to entice a more sophisticated drinker?

Although an extremely popular and vastly consumed brand, Bundaberg Rum isn’t known for being a particularly swanky drop. Stereotypical drinkers are labelled ‘yobbos’, and in 2005 media reports circulated of bar owners in Brisbane refusing to stock the brand due to the abuse suffered by staff at the hands of aggressive drinkers.

Oughton says Diageo takes its responsibilities regarding the sensible consumption of alcohol very seriously. “We want adults to enjoy our products in a responsible way,” he says. “The way that we do that is we have a strict marketing code that we market our products to a high standard and in a responsible manner and adhering to really strict guidelines that we govern everything through.”

The focus for Bundy now, says Oughton, is expanding its appeal to new audiences, with the new products under the Bundaberg name pushing the brand into a new and exciting space: “It’s a brand that requires constant evolution and constant innovation to be able to continue to progress it.

“It has a large loyal base of consumers that love it, and love it passionately. The big focus for us now is continuing to evolve the brand to bring new consumers into it as well,” Oughton says.

These new innovations are starting to receive international attention, with the distillers picking up a bronze medal at the San Francisco International Spirit Awards for the release of the Master Distillers’ Collection Double Barrel variant.

While rum has been flowing from Bundaberg since 1888, Oughton says that the distillery has been making some “phenomenal liquids” that haven’t been released previously. With investment in facilities, the brand can turn out more speciality products. “We’ve been spending a lot of money on the site, up-scaling our production capabilities into small batch, super premium and deluxe rums that are starting to be recognised, not only by our fan base, but internationally as well.”

The Prime Minister’s brother and the bear

For all of the innovation on the product side of Bundaberg, there is one element to the brand that occupies a special place. Bundy R Bear, as he is known, is the polar bear that has adorned Bundaberg Rum labels since 1961. It was introduced by Sam McMahon, brother of then Prime Minister, Billy McMahon.

“He’s a much treasured part of the brand, and he celebrated his 50th birthday just over a year ago, and he’s been an icon of the brand all the way through,” Oughton says.

There are understandably a few questions and theories surrounding why a brand based in sunny Queensland chose a bear that inhabits cold and icy environments as a brand mascot.

Oughton assures Marketing there are no polar bears anywhere near the distillery, but sheds light on some of the more popular theories as to how Bundy R Bear found himself the face of Australia’s most famous rum. “The first of the rumours, and the most popular, is as a symbol that Bundaberg Rum would actually ward off the wickedest of winter chills, and that’s why he was brought onto the pack,” he says.

“There is also a nice little twist in the tale, that the Gaelic derivative of McMahon actually means ‘son of bear’, and Sam McMahon’s father’s favourite bear was the polar bear.”

Used in the brand’s advertising since the nineties, Bundy R Bear is currently being rested above the line but, “he has a busy social life on Facebook,” Oughton says.

Another key element to Bundaberg’s marketing mix over the years has been a focus not just on advertising itself, but also on innovative use of media and other marketing properties. Back in the sixties when Sam McMahon had the rights to the brand, he used events to promote his brand. McMahon was known to tour it around the country, bar by bar, introducing the rum himself to bartenders, a technique rare at the time. Bundaberg has since been a part of many sponsorship deals, particularly in sports, that have always been at the forefront of some strong narrative storytelling in campaigns.

The distillery plays an integral part in the community in which it is based and after which it is named, employing thousands of locals and being a key part of the economy of the south-eastern Queensland town. When the Queensland floods hit earlier this year, for the second time in as many years, homes and businesses in the town were devastated by the natural disaster.

“Those two campaigns were something that leveraged the adoration and the fan base that Bundaberg has. It’s fortunate to have such a strong fan base across the country that, in times of need for both those releases, was able to help us contribute back into the community and help the Bundaberg community get back on its feet,” says Oughton.

“We released limited edition bottles for both of those, and for the last one, ‘Road to Recovery’, we put a nationwide call out for Bundy fans to come to Bundaberg and have an event there to pick up the bottle, which was a limited edition exclusive only to the distillery. That meant that we were able to bring in thousands of people from around the country to start injecting money back into the local economy, which was the overall objective of that event,” Oughton says.

“We tried to fill the hotels and fill the restaurants and fill the cafés and get money back into the community so that they could help to rebuild and, at the same time, raise $250,000 to be able to donate back to the local charities as they helped build Bundaberg back.”

The ‘Road to Recovery’ campaign spanned Facebook, PR, traditional media, product innovation and a special event – the activity aiming to drive visitation back to Bundaberg and stimulate the local economy through tourism.

Leo Burnett worked pro bono on the creative, advertising and social media elements of the campaign and other agencies followed suit, with PR by One Green Bean, media by Ikon, event promotional staff provided by Traffik, printing by STI Group and packaging by Barker Gray.

For any brand to be so successful at 125 years of age is nothing short of remarkable. “We’re very excited about it. These sort of milestones only come up once, and the 125th birthday is certainly a milestone that we are looking to make sure is etched into history for the brand.”

Oughton won’t give away every detail about the celebrations, but says it will be a chance to celebrate with Bundaberg’s loyal consumer base and fans for an entire year. Diageo will be re-releasing some of its old SKUs (stock keeping units) that are no longer on the shelves, old favourites that people can’t purchase, such as Distiller No 3, which is no longer in production.

It has also announced the oldest and most limited release Bundaberg has ever distributed as part of the birthday celebrations. “We’re releasing 1888 bottles of a liquid that has up to 35-year-old rum in it. It’s truly exquisite liquid that we’re hugely proud of,” Oughton says.

Packaged in a sliding timber case, the limited edition anniversary rum is described as, “The pinnacle of all that the Bundaberg Rum Company has achieved in its 125 years and celebrates the distillery’s long spanning history of expert craftsmanship, ingenious thinking, determination and collaboration.”

Bundaberg sourced the material for the rum from all over the world, as well as taking some of the materials from the distillery for the packaging. It will be released throughout Australia on the company’s birthday, 22 November. The brand will also be holding events on the day, as well as promotions in the lead-up to the milestone anniversary.

“We would love for all Australians to be aware that the brand has had such a rich and successful history, and to remind everybody why it’s one of those brands that is found in everyone’s hearts,” concludes Oughton.