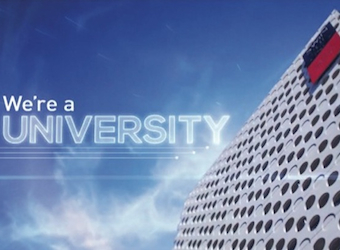 Swinburne University of Technology is the sixth largest university by size in Victoria. Research suggested the market saw Swinburne as basically a smaller, generalist university with a dual sector (TAFE/blue collar) heritage.

How could this perception be turned from a negative into a positive?

Swinburne could not compete directly against the big, prestigious or traditional universities. The brief to the agency was to go the other way and position Swinburne as a small, specialist university not bound in tradition, but obsessed with science, technology and innovation. In short, in a world of rapid technological change, Swinburne would become the most innovative, future-focused university, preparing its students for the careers of tomorrow. The agency response was the ‘Think Forward’ campaign.

The campaign was launched in April 2013 to coincide with the mid-year intake and lead into the 2014 undergraduate consideration cycle. The campaign had three additional ‘bursts’ aligned with the Victorian Tertiary Admissions Centre (VTAC) milestones: open day in August, preferencing opening in September and change of preference in December.

TV was chosen as the launch medium, with ads also placed extensively in pre-roll selected digital channels such as YouTube.

The campaign was designed to drive inquiry with a heavy digital weighting, making the website the first point of contact. All brand communications were directed to a ‘Think Forward’ m-site (thinkforward.com.au), showcasing real examples of Swinburne’s innovation and providing a portal to relevant sections of the main university site.

Other campaign initiatives included a partnership initiated with TEDx Melbourne and a tailored mobile app for recruiting.

Research identified the university category as a whole was failing to emotionally connect with the audience in their brand communications. Education communications tend to be overly rational in delivery and were viewed by youth audiences as dry, self-referential and largely undifferentiated.

If Swinburne wanted to be noticed and change the way young people felt about it, it had to break the established category clichés and creative codes.

Swinburne had to place magic and emotion ahead of logic in its advertising.

The ‘Think Forward’ creative code had:

Further, the campaign won one gold and one bronze award at the CASE (Council for Advancement and Support of Education) Circle of Excellence awards program, the only Australian institution to win more than one award.

Tags:
Previous Article
Ad Standards received record complaints in 2014, but none in top 10 breached code
Next Article
The ideal loyalty program is all about data