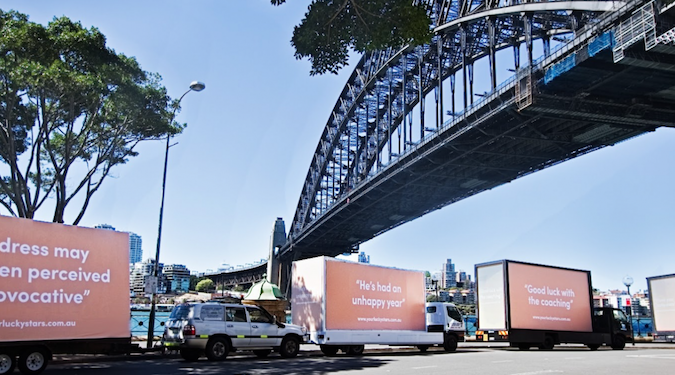 From mobile billboards to a new TikTok hashtag already hijacked by big hitters, what happened in campaigns this week around the country?

Marketers in Australia and New Zealand are behind the times when it comes to TikTok. The social media giant hit a billion active users last month. But, with the local market a bit late to the game, TikTok has devised a solution.

The hashtag adTok was announced on 7 October. The hashtag is dedicated to demystifying the struggles of marketing on the platform.

Focusing on recognisable jingles and sounds, TikTok has leaned on iconic brands to show what can be done. Vegemite, McDonald’s and Cottee’s Cordial are among the first players to jump onboard #adTok.

Geeks2U is an Australian business set to help those who struggle a little with tech. The company sends mobile ‘geeks’ to homes to help with any issues.

Spinach co-founder and executive creative director, Frank Morabito, says: “We felt great chemistry with the Geeks2U team right from the start and that is evident in the work we’ve been able to bring to life despite ongoing lockdowns. This campaign is a fun take on the challenges and frustrations so many of us face in our day-to-day lives dealing with technology.”

It’s a problem unique to an Aussie audience. Our vernacular has struggled to be picked up by certain voice-operated tech.

Recognising the issue, Amazon teamed up with Havas Village to solve it. Using Sophie Monk and comic duo The Inspired Unemployed, Amazon Alexa is taught Aussie slang. From ‘mozzie’, to ‘barbie’ and even ‘bucketing down’, the campaign is a tongue-in-cheek look at the Australian syntax that just wasn’t translating.

The billboards started popping up last week in Sydney. In the face of ex-Knox Grammar student Nicholas Drummond’s controversial court case, health brand Ovira has made some bold statements.

Driving a truck bearing the message “You will not silence our pain” around the Sydney suburbs before parking outside the prestigious school, Ovira sought to continue the conversation about women’s pain.

Since the court case was dismissed by NSW courts, more billboards have appeared. The mobile billboards simply state comments made by the judge on the case. “He’s had an unhappy year” and “Good luck with the coaching” are two of the quotes as picked by Ovira to make a stand against the ruling.