South Australia’s immunisation rate for Aboriginal children was also the lowest in Australia, 14% lower than the national average of 85.69%.

Immunisation is one of the most effective public health measures to prevent contagious disease. Yet, despite the South Australian Childhood Immunisation Program providing free vaccinations at birth, two, four, six, 12 and 18 months of age, the immunisation of South Australia’s Aboriginal children continued to lag behind.

Within the context of Federal and South Australian Government funding for the ‘Closing the Gap’ program, action needed to be taken.

Our broad objective was to increase immunisation rates in South Australian Aboriginal children aged zero to seven years, with a major focus on zero to 12 months of age.

Research and client interviews uncovered a variety of key insights to guide strategy: 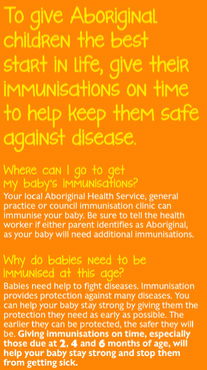 In consultation with SA Health, option one was determined to be the approach most likely to succeed. This decision was guided by three observations:

The fact that 95% of Aboriginal children in South Australia are born in public hospitals enabled us to focus our strategy entirely on a personalised approach. In addition, all immunisation providers could be communicated with via direct channels. These direct channels enabled us to absolutely maximise effectiveness and efficiency with zero wastage.

A summary of our channel strategy is as follows:

A gift-pack was developed and given to Aboriginal mothers in hospital after their baby was born. The pack included three grow suits sized 000, 00 and 0, which included our campaign message ‘Help me stay strong; get me immunised’ and the key immunisation ages ‘two months’, ‘four months’ and ‘six months’ on the sleeves of the respective suits. The 000-, 00- and 0-size suits were designed to be the perfect fit for children aged two months, four months and six months.

The pack also included a play toy as well as a simple DL brochure explaining the importance of immunisation together with some FAQs. The contents were packed in an appealing carry bag.

Use of language, imagery and colour were critical in positioning our campaign in a relevant way for our target audience. Newborns are immunised  while in hospital, so the challenge of our campaign was for parents to remember the two-, four- and six-month immunisations – and to get them on time.

Orange, ochre and mustard colours were selected to connect with our Aboriginal target market. Typography was clean and simple.

In addition, information sheets explaining the campaign were sent to all immunisation providers in South Australia. This was accompanied by a series of A2 posters to be placed within their practices and community centres.

The most recent Australian Childhood Immunisation Register (March 2015) shows that our ambitious campaign targets have been achieved and we have closed the gap in childhood immunisation:

The campaign won gold in the Small Budget category at the 2015 Australian Effie Awards.