Driving change with Uber and DrinkWise

Driving change with Uber and DrinkWise 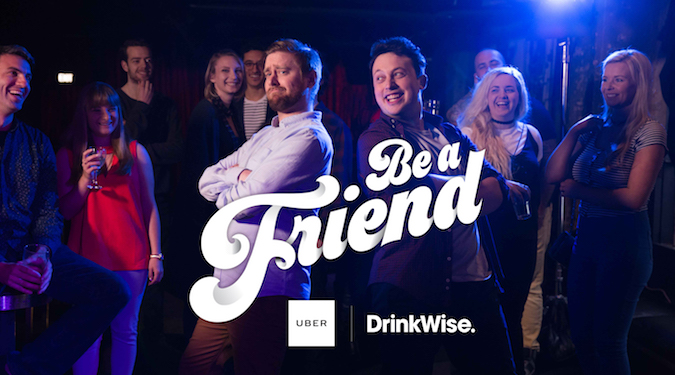 Social responsibility and collaboration feature in Uber and DrinkWise’s ‘Be a Friend’ campaign.

This article originally appeared in The Versus Issue, our February/March issue of Marketing mag. New issue coming soon!

The new ‘Be a Friend’ campaign, from Uber and DrinkWise is a great new example of collaboration in action for the common good. The three videos have surpassed 1.2 million views since launching on YouTube before Christmas, timing chosen to coincide with the festive season, a time in which horrific news about road accidents is tragically common.

This collaboration between Uber and alcohol industry body DrinkWise encourages young people to look out for their mates when they go out drinking. As part of the campaign, Uber and DrinkWise gave away $1 million in ride discounts for the holiday season.

Nic Nichols, creative director at 40/40, says the campaign was the agency’s largest body of work for Uber since linking with the company in 2014 for a small part in its Gold Coast launch.

“Our relationship with Uber started as a result of our street art skills, which they wanted for some beat-up cars at their launch at Miami Marketta,” he says.

“From there we went on to deliver on-demand campaigns for UberPUPPIES, UberIceCream and UberJET as well as doing work for Uber for Business and on the controversial ‘Fine the Premier’ campaign last year.

Then Uber entrusted us with this national campaign with DrinkWise, which we basically controlled from inception to execution – it was a huge step forward for us.

“We conceptualised the brand and then did the logo, talent casting, video production, sound design, web design and photography – so we pretty much developed the whole campaign, in conjunction with our film production and photography partners Milkable and music maestros Jarsonic.

“It was an opportunity for us to really prove ourselves and our collaborative approach by partnering with like-minded specialist partners on this project, Milkable and Jarsonic.”

Using 1970s hit and Golden Girls theme ‘Thank You for Being A Friend’ as the soundtrack, the ads depict 20-somethings successfully encouraging their alcohol-affected mates to take an Uber ride home or to their next destination during a night out.

“Our brief was to make it relatable for a mass audience so we crafted the message in a way that said you can look after your mates in a way that doesn’t have to turn into a buzz kill,” he says.

To purchase a copy of The Versus Issue, or a subscription to the mag, visit the online shop »

Tags:
Previous Article
News Corp campaign asks ‘Do you know where your ad is today?’ amid programmatic media buying controversies
Next Article
Australians cautious on artificial intelligence but open to its benefits