It’s difficult for me to write the review on this event. Schmart Marketing, and its progenitor PMP Limited, did and do much promotion in this magazine. But, sorry, that doesn’t change the fact this was the best marketing/advertising event I’ve been to in a year.

Schmart Marketing got the spectrum of speakers right with client, new media, agency and owner/operator represented by

Hayzlett stomped out in his black caiman cowboy boots and, better than my preceding three coffees, woke the crowd with, “If you were thinkin’, ‘oh great, here comes another loud American’, I’m here to tell you I won’t disappoint!” He then took us in with his devil-may-care style, explaining that through his “shake things up” remit at Kodak he discovered one of a CMO’s core responsibilities is creating tension within a company. He also proffered the advice that befriending your CFO and demonstrating the margin and revenue impacts incurred when certain programs are ceased creates an unlikely and powerful ally in finding more budget when needed. 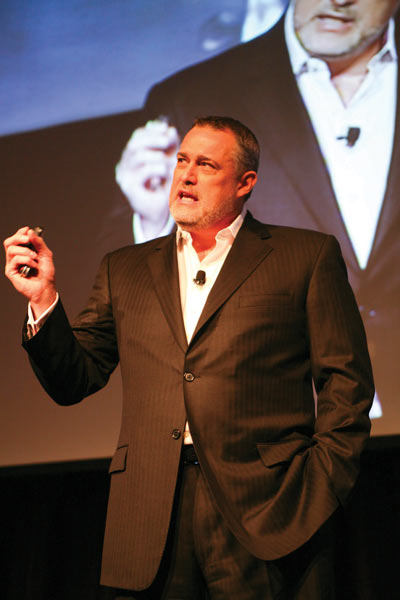 MacArthur’s advice was aimed more at those brands and SMEs beginning in social media – much of it I’d heard many times before, but a few undiscovered tools excited. However, the number of pens scribbling around me suggested this introductory level content is still very much sort after by the majority of senior marketers.

I can’t comment on Russell Howcroft’s hour of proselytizing as I had the good fortune of interviewing both Hayzlett and MacArthur during his speech – look out for a Hayzlett ‘Career Centrefold’ in our next issue.

Allis spoke of Boost’s journey: from the nascent idea, to hot young thing, to slashed tall poppy and finally international expansion – along with all the bumps en route, including her husband’s print ad ‘The suck you love to swallow’…

But one of the real highlights of the day was seeing the four speakers battle it out for over an hour across a range of topics in one of the few unscripted panels I’ve seen in a very long time. In discussing a phantom widget, Howcroft sung the song of mass media while Hayzlett and Mac countered. Hayzlett scored a sucker punch when he asked Howcroft approximately how much a full page ad in Melbourne’s highest circulating daily newspaper cost. Russell responded $30,000 and that it would reach half a million eyeballs. Hayzlett’s counter strategy was to give that much product of widget X away to the most read local bloggers across various relevant interest groups. He did concede, however, that in most cases he’d just do both – broadcast and narrowcast.

But the real proof of brilliance? Even the Twitter stream was free of cattiness.

Will you be there at the largest gathering of CX professionals in May?
Liv Croagh April 5, 2022

Will you be there at the largest gathering of CX professionals in May?