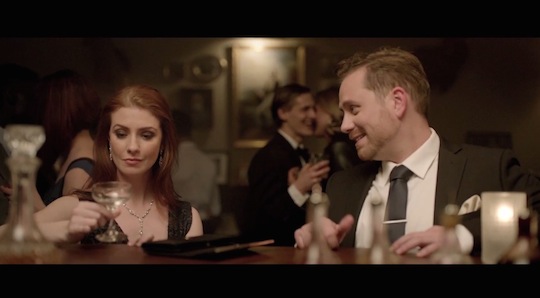 A man attempting the “pick up” a sultry woman named Gonorrhoea in a bar won first prize in a short film competition that aimed to raise awareness about the threat of antibiotic resistance.

The #SaveTheScript competition was a collaborative effort between Tropfest and NOS MedicineWise and challenged entrants to make a 45-second short film about antibiotic resistance, an issue the World Health Organisation is labelling a serious, worldwide threat to public health.

“Antibiotics aren’t what they used to be,” Gonorrhoea purrs into a man’s ear during the winning short film.

“People use them so often these days the world has created new strains of superbugs that spread old favourites like tuberculosis, syphilis and yours truly.”

‘The Pick Up’ was the creative brainchild of OneWay Pictures. Producer Vincent Zimbardi said that audiences sometimes deflected the overly dramatic and serious but people embraced and engaged in humour.

“As antibiotics continue to lose their power, such an important and serious message needed to get out there and reach people.”

Tropfest managing director Michael Laverty said he was absolutely thrilled by the incredible entries received and how filmmakers took the issue of antibiotic resistance in so many creative, inspiring avenues to raise awareness.

“The campaign was industry-first and boundary pushing and we encourage people to watch and share these films.”

NPS MedicineWise is a not-for-profit evidence-based organisation that collaborated with Tropfest for the first time on this campaign.

NPS MedicineWise managing director, Dr Lynn Weekes, said short films have enormous potential to reach a global audience and encourage people to think about how they can join the fight against antibiotic resistance.

“Antibiotic resistance is a serious global health issue that is already affecting our community. Conversations must happen in lots of different places to ensure people understand this threat and our role in preventing it.”

Second place in this competition went to ‘Fight Antibiotic Resistance,’ a film by animation director Stevie Watkins that told the tale of a young girl who built up an antibiotic resistance with disastrous consequences.

Entries poured in from global locations including Africa, the Middle East, Europe and the United States from students, amateur and professional filmmakers, health professionals and people who have been directly impacted by this serious health issue.

Tags:
Previous Article
Optus ‘Clever Buoy’ wins Cannes Gold Lion
Next Article
Six things Woolworths needs to do to get back on track