Foster’s coins ‘Australian for chic’ tagline in the UK

Foster’s coins ‘Australian for chic’ tagline in the UK 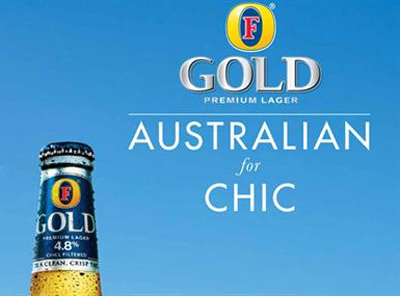 To build on the brand’s ‘posh’ qualities, Heineken has invested AU$11.1 million in an ad campaign for its Foster’s Gold premium beer, which will run with the tagline ‘Australian for chic’.

The campaign, set to launch on 5 March and span TV, outdoor and digital channels, will incorporate elements of humour but aims to reinforce the premium standing of the new variant, according to Marketing’s sister publication [Ed’s note: in name only], Marketing UK.

Head of customer marketing for off-trade at Heineken, Doug Walker, told Marketing UK that the campaign was being brought in to make sure the premium beer was top of mind for consumers in the lead up to Summer.

“We’re launching the next phase of the Foster’s Gold campaign in time for the crucial Summer trading period, and reaching nine million of our target audience to make sure that it’s on the top of the list when shoppers drop in to a local shop,” Walker said.

Launched in August 2011, Foster’s Gold is a 4.8% alcohol by volume beer aimed at tapping into mixed-sex drinking occasions. Since launch, it has sold 33 million bottles in the UK.

The campaign will continue the humorous theme featuring regulars, Brad and Dan, who will be joined by Holly Valance, originally of Neighbours fame, in the first commercial.

The face of Foster’s Gold, Valance has starred in previous ads for the brand alongside Brad and Dan, such as the launch ad shown below which emphasises the Australian accent and is set at Opera Bar in the forecourt of Sydney’s Opera House.