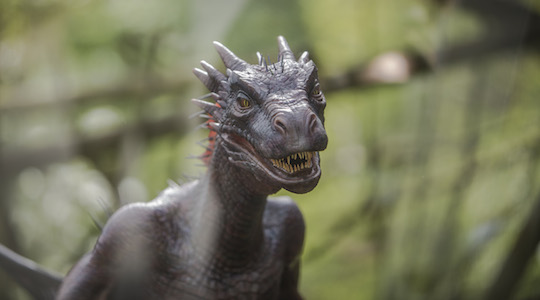 Will this Game of Thrones dragon replica light a fire under Northern Ireland’s tourism industry?

Belfast Zoo has this week revealed its latest addition: an animatronic version of a Game of Thrones dragon.

The Game of Thrones replica dragon has a 10-foot wingspan and is operated by two controllers. Visitors to the zoo can watch the dragon’s ‘feeding time’ and vet check-ups.

The dragon is the culmination of Tourism Ireland’s campaign in partnership with HBO to promote Northern Ireland as the home of Game of Thrones. Earlier stunts in the campaign have included three-eyed raven and dragon egg replicas. The three-eyed raven replicas were perched on top of old, wooden signs that pointed to locations in Northern Ireland where the series is filmed. The dragon egg replicas were nestled among fruit and vegetables for sale at St Georges Market in Belfast.

Belfast Zoo manager, Mark Challis, said in a press release the zoo was thrilled to have such an “exceptionally rare creature”.

“This dragon is an important addition not only for us, but for Northern Ireland as a whole,” he said.

“Despite their fearsome reputation and fabled ability to burn entire cities to ashes, we’d like to reassure the residents of Belfast that our keepers have received expert training, and we’re looking forward to seeing him (the dragon) thrive in his new environment.”

Watch the dragon in action: