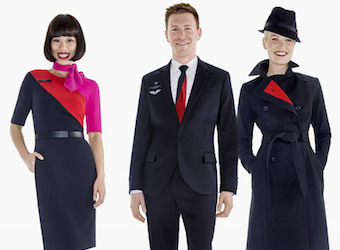 By Prudence Black, ARC DECRA fellow in gender and cultural studies at the University of Sydney and author of The Flight Attendant’s Shoe, a history of the Qantas uniforms and the uniforms of other airlines.

It’s hard to imagine it today, but once people would put down their newspapers to stop and stare at young women as they strolled through airport terminals wearing figure-hugging suits, the half-winged badge glistening on their jacket lapels.

Are people going to do that on Thursday morning as 11,500 Qantas staff fill airports and aeroplanes in their new uniforms?

Those who do may wonder why a brand that has traded on its ‘Australianness’ when circumstances suited it has now ditched its Indigenous art-themed uniforms in favour of an international look that would not seem out of place on French or Italian flight attendants.

The answer may lie in Qantas’ recent corporate upheaval, its appetite for offshoring and and plans for a push into Asia.

Step back in time

Historically, the decision to create a new airline uniform usually happens for three reasons: to show off a shiny new bit of technology, when times are tough, or when there is a change of management and someone wants to make a difference.

Qantas’ decision to launch a new uniform is probably a combination of all three. The first of the Boeing 787 Dreamliners arrived this year, times are tough for Qantas, and there was a change of management. This is only the 10th uniform in Qantas history.

Flight stewards came on board the flying boats in 1938 wearing military-style khaki suits. In 1947 Qantas made the brave and contentious decision to purchase the triple-tailed American Lockheed L749 Constellation plane and thereby sever some of Australia’s ties with England, the previous supplier of choice.

To welcome the new fleet, flight hostesses were employed and their first destination was the fifth floor of the David Jones department store, where they were fitted with a military-style navy suit, complete with forage cap. What will this new uniform mean for the Qantas workforce?

It is hard to imagine wearing the same clothes to work every day for nine years. There is nothing like a new uniform to help build the morale of staff, and recapture a brand.

In the downturn of the industry after September 11, almost every major international airline created a new uniform for their staff. There is no comparing 9/11 with the current industrial turmoil but if Qantas wants their organisation to appear ‘as one’, a uniform can do that by creating a sense of unity and encouraging professional pride in an organisation. But as staff morale plummets, it will take more than a new frock and trousers to keep the smile on the faces of Qantas staff. Perhaps Qantas recognises this already.

This week in the daily papers Qantas ran an ad in the fuchsia pink and ruby red colours of new uniforms, proclaiming that ‘it’s about a new look that goes deeper than our new uniform’.

Two years ago, Qantas announced they were redesigning a new uniform for cabin crew and ground staff. Keen to keep up with their national brand identity, it was announced they were looking for an Australian designer and the uniform would have with a distinctly Australian look. The words “fresh and contemporary” kept on popping up and out of CEO Alan Joyce’s cherub lips. They found an Australian designer – but there was a twist. Martin Grant from Melbourne has been living in Paris for the last 25 years, building a loyal international clientele of A-listers such as actors Tilda Swinton, Cate Blanchett and US socialite Lee Radziwell.

Grant, after extensive consultation with airline staff, said he was keen to capture something of the lost glamour of the airline. His uniform features his signature trench coat, and a trilby hat made out of recycled bottle tops. The stand-alone piece is the French navy dress with a bold diagonal colour block of red and fuchsia.

While Grant may have recreated something of the past in the simple tailored look of the suits and the simply cut dress, there is also something about the colour, and the pared-back style, which is reminiscent of the one of the most memorable music videos of the late 1980s, Robert Palmer’s ‘Simply Irresistible’.

Yes, there have been complaints to the Flight Attendants Association of Australia National Division about the new uniform being tight, but with all new uniforms there are grievances with the designs (where to put the pen) and the style guidelines (only three shades of lipstick). However, the move to a plain classic style creates a corporate look that says nothing about Australia in the way that the previous Indigenous design featured on the Peter Morrissey uniform did, or the Yves Saint Laurent (YSL) uniform from 1987 which was covered with kangaroos.

Bounding on the back of the bicentenary celebrations, YSL-clad Qantas crew were worn down by the requests to sell the shirts off their backs to international tourists keen to get a piece of Australiana. At the time of the release of the YSL uniform, Vogue Australia commented that:

“Notably absent from the wardrobe: a hat, one impediment the modern flying woman can do without. Notably present pants, a must for most of us.” It would have to be one of the toughest design gigs in the world creating a uniform for a workforce of thousands, styled to suit ages 21 to 65, in 13 different sizes.

Fashion always creates it own death, and as the new uniforms start to roll out, it is time to start thinking about what the next uniform might be like.

As Qantas attempts to move into the Asian market, I’d say that while a future design might include a stylised cheongsam, I wouldn’t bet on it having a flying kangaroo pattern.