Google was Australia’s best perceived brand at the end of 2015, new figures from YouGov BrandIndex has found.

The study, by UK-based research company YouGov, includes over 250 brands and asks respondents: “If you’ve heard anything about the brand in the last two weeks, through advertising, news or word of mouth, was it positive or negative?”

Scores can range from 100 to -100 and are compiled by subtracting negative feedback from positive. 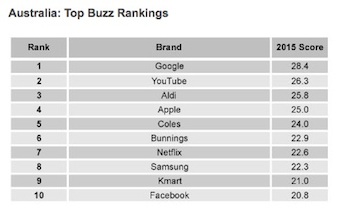 The top 10 list is dominated by digital heavyweights, including YouTube and Apple. This shows that consumers are putting greater emphasis on socially shareable and digital adaptability.

Despite mixed publicity in 2015, German food store Aldi, came in third on the list, the highest non-digital brand featured. Supermarket giant Coles came in fifth, while major rival Woolworths didn’t make the list following a year of forgettable ad campaigns such as the ‘Fresh In Our Memories’ debacle that linked the company logo and tagline with war veterans as part of the 100 year memorial of the landing at Gallipoli.

The Australian findings are consistent with the global trend that sees digital based brands featuring among the best perceived. Although not featured in the Australian ranking, Amazon sits high among the best perceived brands on a global scale. Google, YouTube, Apple and Netflix, all featured in Australia’s top 10 list, are also ranked highly globally. Also among the high achievers is the world’s largest smartphone manufacturer, Samsung, appearing on 12 different countries top 10 lists. Popular social media website, Facebook sits just behind, appearing on 11.

YouGov’s BrandIndex is a daily measure of brand perception among the public. Every six months it consolidates its data and publishes rankings. These rankings are for Q4 2015. The firm’s Australian operation is a recent addition to BrandIndex, starting in the second half of 2015, and currently includes tracking of more than 250 brands.