The juggernaut group buying sector exceeded revenue expectation in 2011 and posted a phenomenal 650% year-on-year growth. Its ability to tap into both the power of the ‘crowd’ and a post-GFC consumer trend toward thrift has proven to be a lucrative combination for the 100-odd businesses that now populate the young industry.

It seems getting consumers to open their wallets in 2011 was as simple as offering a hefty discount and making them feel clever for saving 80% on 100% of the money they wouldn’t have spent to begin with.

But while group buying is nothing less than a runaway success – according to Telsyte, Groupon Australia alone grew 1,356% in the second quarter  of last year – it is not yet living up to its promise. It’s the talented youngster, still to knuckle down and realise its potential. And if it’s not careful, the bubble may burst; sales may already be weakening with a 9% drop in the market over the last quarter of the year.

According to data from research group TNS, only 22 percent of Australians are current users of group buying sites, and a further 30% are yet to hear of or understand the concept, telling us there are opportunities to both encourage more repeat customers and recruit new users.

The most prolific users are 35-49 year-old females.  Males, Gen Y (particularly younger) and Baby Boomers have not joined the stampede to the same extent.

Engagement among men who have signed up is significantly lower than females with more having unsubscribed from the daily emails and more claiming to be bored with the type of deals on offer.  This stands to reason, with the deals dominated by categories which traditionally fall into the female leisure shopping domain.

And the daily emails these businesses send to their subscribers polarise their audience – half (49 percent) find the deals to lack personal relevance, while the rest (43 percent) look forward to receiving them.

While the sector has been phenomenally successful so far, it is yet to put into practice basic elements of targeting via email or mobile in Australia. Aside from niche operators, group buying sites make little effort to send relevant deals to their customers, flinging bikini wax deals at men and family holiday offers at singles left, right and centre. The market operates in a deal rather than data-driven manner, bombarding its subscriber base with offers of limited relevance.

Imagine how successful group buying businesses could be if, instead of indiscriminately emailing subscribers, they tailored deals by gender, age, interests, past buying behaviour or even current location. Groupon’s global chief executive, Andrew Mason, appears to be taking this commonly held customer complaint seriously. Upon releasing the company’s earnings to investors, which detailed a $42.7 million loss for the company to end 2011, he hinted at plans to deliver more targeted deals.

The company, which already delivers location-aware deals through its Groupon Now app in 31 markets, intends to invest in features, which according to Mason, will allow it to respond to requests to “stop sending me pole-dancing lessons.”

A spokesperson for Scoopon also confirmed that they’re looking to introduce location-based deals to their mobile app in 2012.

With analysts tipping that many in the crowded market will fold, fulfilment of group buying’s potential will come to those who deliver deals that their subscribers want, every time, when and where they want them. 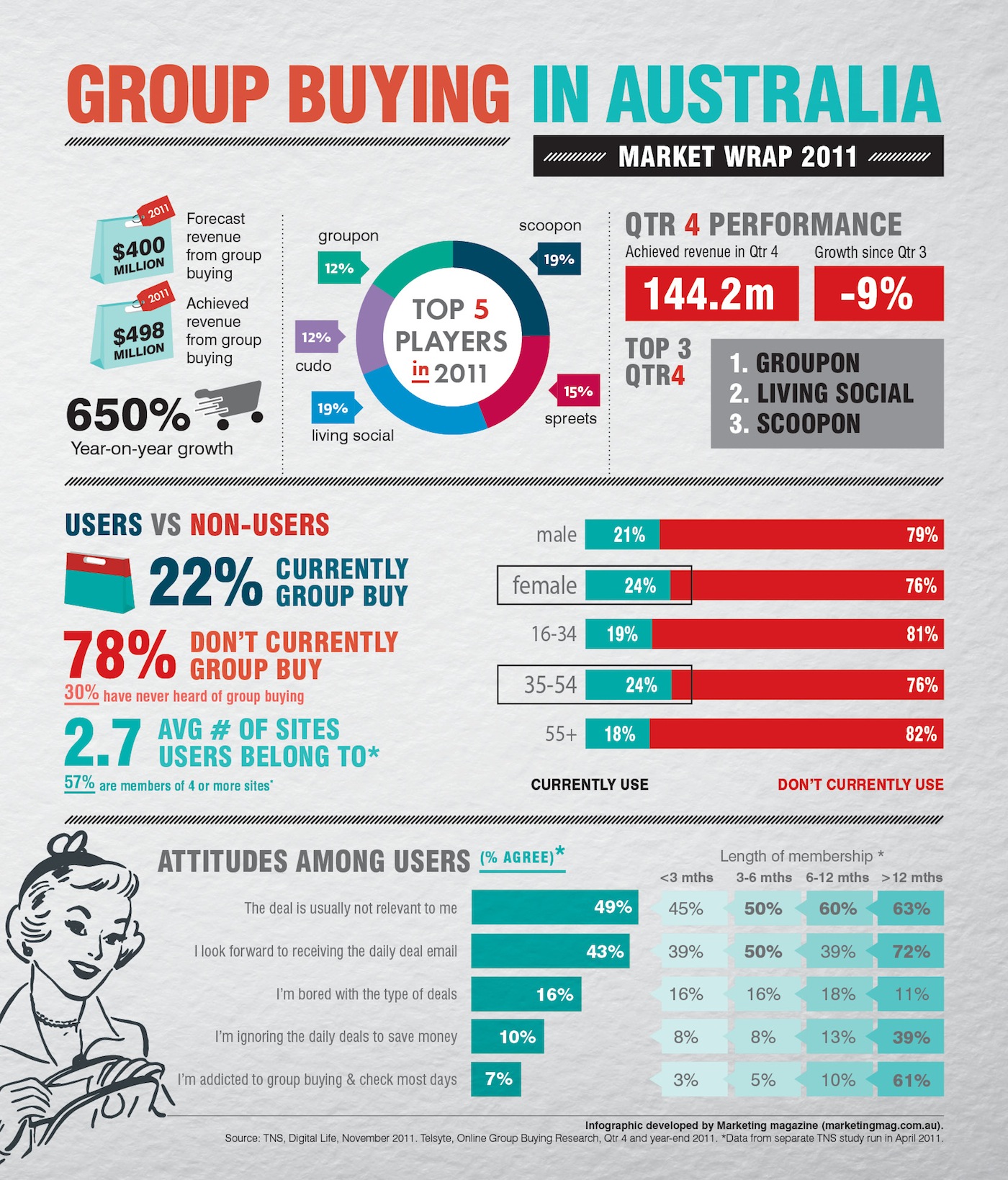 Previous Article
Mobilise your brand: tips for turning an online ad into a sale
Next Article
Online video for business – steps to creating a professional YouTube channel