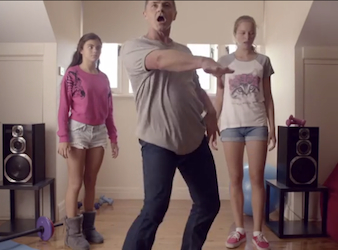 The campaign, created by the BWM group, talks to the new normal in family households across Australia where movies are  increasingly consumed on devices other than the TV. The campaign creative focuses on the mischief that both kids and adults get into when they’re not entertained, and explores the modern family dilemma of finding the right kind of entertainment in the digital age.

Rob Belgiovane, chief creative officer of BWM Group says, “The insight for the Presto campaign came from our realisation that the very thing we worry about – how much time our kids spend in front of devices – may well be a godsend, considering what we used to get up to as kids before these devices existed.”

“We’re excited to be part of launching the new Presto brand during a time of change within the home entertainment industry. We love Presto’s playful and passionate personality that sets it apart from other services and so the campaign is unapologetically irreverent and, in the spirit of the BWM brand philosophy, is designed to get Australian’s talking.

“From a father embarrassing his teenage daughter with daggy dad dance moves, to a mother reliving the horrors of her delinquent youth – the universal truth that people get into mischief when they’re bored is something everyone can relate to,” he says.

The TVC was directed by US comedy duo/directing team, The Real McCoys and is the first Australian project the team has done working through Filmgraphics Entertainment in Australia.

Jacqui Feeney, director of Presto and Foxtel On-Demand, adds, “BWM got Presto’s rich personality around movies right from the start and understood that it is for the average Australian who is curious about the next generation of entertainment. Presto is a simple, easy to use streaming movies service that nicely complements other family entertainment options.”

“It’s targeted at people who aren’t considering the full Foxtel experience. With Presto they have access to the Foxtel Movies Channel’s vault of content as both streaming on-demand and linear channels.

“BWM have pulled together a magnificent team that have been smart and great fun to work with. The campaign they assembled for us really shows off a bit of our cheeky personality,” she says.

Tags:
Previous Article
Five things brands can learn from journalists
Next Article
Growth for online retailers doesn’t have to come at expense of margin