As the silly season draws to a close, research firm Roy Morgan has taken now as an apt time to explore how Australian drinkers feel about some of the more memorable beer commercials of recent times.

Roy Morgan Research has measured the real-time reactions of a group of viewers to seven ads from beer behemoths CUB, XXXX and Lion. To qualify for the study, respondents were required to have drunk beer in the last four weeks and be aged over 18.

To test the ads, the researchers used an online tool that tracks and records viewers’ second-by-second emotional involvement and engagement with TV commercials, called The Reactor.

The clear favourite was XXXX Gold’s ‘Chicken Rotisserie’ commercial, in which a group of mates attempt to cook a chicken over an old car engine. Men and women reacted similarly positively, resulting in an overall likeability score of 60.

The XXXX ad also scored highest for Hot Zone (percentage of people scoring over 70), Peak Score (highest average achieved), Critical Likeability (second half of ad) and End Score (last three seconds). Interestingly, beer is not mentioned during the commercial, playing a supporting role instead (the friends are all holding stubbies of XXXX Gold).

The dream-like Toohey’s Extra Dry ‘Nocturnal Migration’ commercial, featuring herds of deer roaming the night streets, clubbing, and finding love, was well-liked, particularly by female viewers; while the quirky neo-colonial, very Tasmanian ‘Waterfall’ ad for Boags Draught was a hit with male viewers. (Both beers are owned by Lion.)

“Humour seems to work extremely well for this kind of advertising, and the most popular commercials tended to be funny. Quirkiness — as in the Toohey’s Dry ad or surreal Hahn Super Dry ‘Drummer’ commercial — was also well received.

“Of course, like-ability isn’t the end of the story. Viewers need to recall the product being promoted, and it was here that Vic Bitter excelled with its ‘Destiny’ ad, despite it being one of the least liked commercials. “These days, when viewers have more TV channels than ever to choose from, not to mention online alternatives, the most successful ads need to be both likeable and memorable – or risk sinking without a trace.” 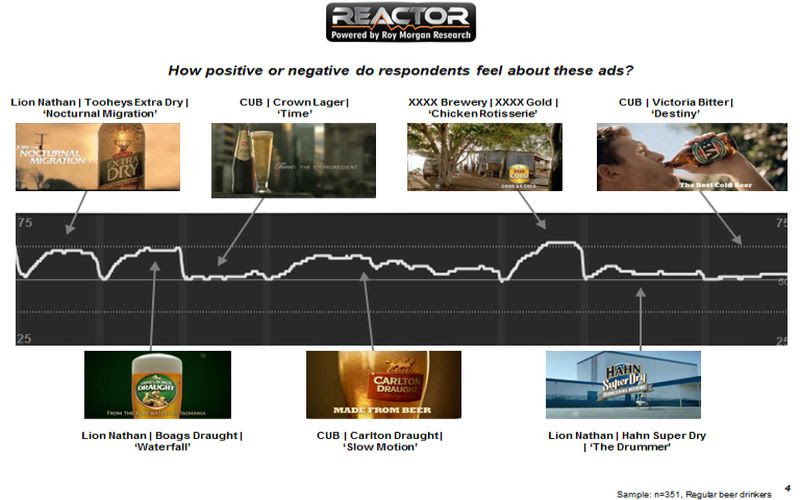