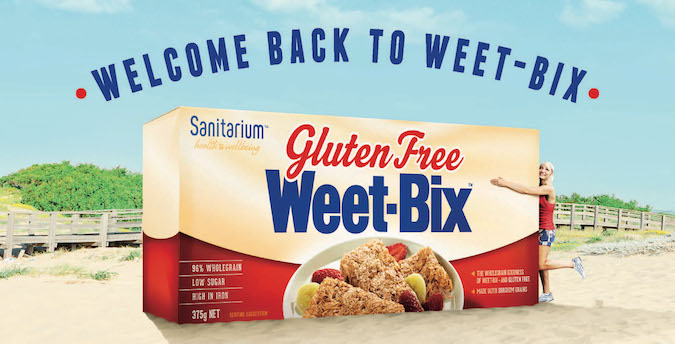 Sanitarium entered the growing gluten free food market with one of its biggest and most established mass-market brands: Weet-Bix.

This article originally appeared in The Generation Issue, our June/July issue of Marketing magazine.

However, Sanitarium’s qualitative research (Neer Korn Research, 2014) indicated that the gluten free category offered a serious lack of choice in terms of variety, taste and convenience. Gluten free cereal, in particular, was hard to find and was like ‘eating cardboard’. And many of the ‘healthier’ gluten free products were actually less healthy and higher in fat and sugar than their non-gluten free counterparts.

No wonder people who needed gluten free foods felt like they were constantly forced to compromise, and being taken advantage of by food manufacturers, which seemed to be making them pay more for less.

For a mass-market brand like Weet-Bix, the gluten free opportunity was intriguing, but it would require an entire factory to be dedicated to the product, which was no small investment. Sanitarium needed to establish the size of the prize.

Just 1% of the Australian population has coeliac disease, with up to 5% having gluten sensitivity. However, Sanitarium’s qualitative research indicated that after one person in a household is diagnosed with coeliac disease, particularly if it’s a child, the diet of the whole household often becomes gluten free.

Quantitative research revealed that more than 20% of the Australian population were actively looking
to reduce the amount of gluten in their diet.

Sanitarium enlisted creative advertising agency, BWM Dentsu, to create a traditional, digital and social media campaign to launch its gluten free product. The potential market and target audience for the campaign was identified as being:

This gave the BWM Dentsu and Sanitarium teams confidence that the gluten free opportunity for Weet-Bix was significant. They set the marketing objectives:

In terms of organisational outcomes, Sanitarium wanted to generate incremental sales to Weet-Bix’s original ‘blue box’ product and substantial goodwill towards the Weet-Bix brand and Sanitarium.

The fact that gluten free foods have been increasingly perceived to be healthier by many Australians was both an opportunity and a potential pitfall. The core Weet-Bix brand is founded on the authentic goodness of natural wholegrain, which is held up as the gold standard of a healthy breakfast. Sanitarium could not afford to cannibalise its flagship brand, denigrate wheat or fuel the anti- wheat movement in any way.

The BWM Dentsu team therefore needed to ensure that Gluten Free Weet-Bix stemmed from the Weet-Bix parent brand, while also being distinctive enough to get noticed. This was the biggest new launch in the history of Weet-Bix. Sanitarium created a gluten free product with the ancient grain sorghum, which performed extremely well in taste tests, so did not feel like a compromise to consumers.

Staying true to the brand’s nutritional integrity, Sanitarium ensured Gluten Free Weet-Bix was as nutritionally similar to Weet-Bix as possible. So, unlike many gluten free products already in the market, it represented no compromise in terms of health and sustenance. BWM Dentsu applied the Weet-Bix Modern Masterbrand process, which centred on the organising idea ‘All Aussies are raised on Weet-Bix’. The premise was that all Australians, no matter who they are or where they come from, have one thing in common – practically all of them have eaten Weet-Bix at some point in their life.

Sanitarium’s qualitative research indicated that Australians who were unable to eat Weet-Bix due to gluten sensitivity, or due to a family member being coeliac, would love to come back to the brand. And mums would love to give it to their coeliac children, passing on their own fond memories of Weet-Bix.

The core proposition for Gluten Free Weet-Bix captured these emotions: ‘Welcome back to Weet-Bix’. Gluten Free Weet-Bix offered coeliac consumers a normalising experience, bringing them back to a mainstream brand and taste, and easing the burden of restricted choice. It could transform breakfast from a chore to a pleasure, and even provide a sense of belonging to people who were feeling on the fringes of mainstream food culture. All this provoked impassioned conversation and the desire to purchase and recommend the product.

BWM Dentsu and Sanitarium realised this was much more than a new product launch. The strength of feeling elicited by the brand suggested Gluten Free Weet-Bix could build the Weet-Bix masterbrand, acting as a brand energiser and generating excitement, news and even gratitude. BWM Dentsu therefore decided on a broad reach, high impact media strategy including TV, experiential and social activation.

A whisper campaign began in mid-2014 across digital and social media. It started with an unbranded rumour of the creation of Gluten Free Weet-Bix, followed by a confirmation. Gluten free bloggers and influencers were sent samples to trial, in an effort to gain their support and encourage them to spread the good news. After the word had been spread, Gluten Free (375 grams) and Gluten Free Sunflower Seeds and Rice (400 grams) were launched in Coles, Woolworths and independent retailers.

This was supported by a fully integrated ATL (above the line) communications launch on TV, OOH (out of home), POS (point of sale), catalogue, digital and social: introducing Weet-Bix Gluten Free – ‘Welcome back to Weet-Bix’.

The launch received very positive coverage across digital and traditional channels, including a positive story about the dedicated bespoke Gluten Free Weet-Bix factory on Channel Seven’s Today Tonight. Bloggers and reporters said Gluten Free Weet-Bix was ‘as good if not better than the original Weet-Bix’.

Thanks in large part to the whisper campaign and pre-launch activity, massive social reach had already been achieved by the launch date. The official announcement post alone reached 7000 people on Facebook. The overall Facebook reach of the campaign totalled 672,768 people, and included impressive engagement figures of 43,504 likes, comments and shares.

Within just four months of launch, Gluten Free Weet-Bix was contributing a significant increase in new sales to the Weet-Bix brand.

The launch was named a winner at the AMI Awards for Marketing Excellence in the category ‘New Brand, Product or Service Launch’.

As a company, Sanitarium also gained value from an outpouring of consumer goodwill, which helped build its corporate brand. Sanitarium and Weet-Bix received a lot of heartfelt thanks from consumers, expressed on social media. Beyond selling a product Sanitarium was, in a small way, changing people’s lives for the better, in keeping with its corporate brand mission: ‘To share with our community a message of health and hope for a better life.’

To purchase a copy of the current mag issue or a subscription, visit the shop »

Tags:
Previous Article
KFC brings the bird to Birdsville in new integrated campaign
Next Article
Debate: was marketing ever the underdog to sales?