At 99designs we’ve come to know the design business very well, with more than 180,000 graphic design projects completed through our site since pioneering graphic design crowdsourcing. We’ve seen every variant of designer-client relationship and heard praises sung, curses cursed and war stories told from both sides.

To put the anecdotes we’ve been privy to into context, we recently surveyed more than 2000 graphic designers around the world. We aimed to find out what designers are seeking in their interactions with clients, what challenges they face, and how the best relationships function.

We’ve distilled the results of this survey into a few vital guiding principles that’ll help you develop good relationships with exceptional designers:

Be clear about your needs

Provide a clear conceptual brief, so the designer knows what they’re trying to express visually. The thing designers like the most is someone who knows what they want – and this goes far beyond the direction to simply ‘make it look good’. You have to clearly describe the nuances of your product or service for a designer to efficiently deliver a design you love.

It’s also important that you’re clear about the terms and nature of a project. If it’s ongoing, say so – designers will be more engaged and maybe even discount their rates if there’s the chance of additional work. If there’s a set time-frame to a job, let the designer know this in advance, rather than calling them and demanding work before deadline.

Make your budget and rate clear, and have regular discussions about remuneration if the designer is doing more hours than you’ve initially budgeted for. Try to pay on time – many small businesses, including designers, experience cash-flow issues, and paying promptly will make good designers keen to work for you again.

Designers are turned on by creative challenges. More than half of the designers surveyed said the chance to spread their wings and create something amazing is what drives them, with money coming in second.

Find ways to engage your designer creatively and present the problems to be solved in terms of creative possibilities. Our feedback tells you that designers crave your input, and this is your chance to encourage your designer to excel.

Designers aren’t just looking to be patted on the head and acknowledged when they say they want feedback during a project. A designer, especially a freelancer who has just begun working with you and doesn’t yet have a good idea of your aesthetic tastes, will want to get a quick ‘yay’ or ‘nay’ on a rough concept or idea before putting in painstaking hours to flesh it out. Taking the time to give quick, constructive responses will strengthen your relationship, and you might even get what you want in fewer billed hours.

At the end of the day, you do call the shots. It’s your money that’s being spent, and your business that will use the designs produced. Very few designers will walk off a job simply because there are disagreements with the client.

Having said this, you’re likely to get far better value for money, and come out with a better product, if you’re willing to incorporate a designer’s input and listen to their reasoning. Designers have opinions, and in the area of visual expressions of businesses, they are experts. It’s likely the designer has sound business reasons for their recommendations, and it doesn’t hurt to ask if it feels like they’ve forgotten to bring you along for the ride.

Designers are businesspeople, too, and they don’t necessarily want a full-time job at your company, or any company (though feel free to offer if you want to snap them up!). In ten years’ time, seventy percent of designers see themselves still freelancing or running their own businesses. This goes to show that the common perception held by business owners that designers are clueless about the business world – which 30% of designers indicated as a leading misperception – is badly misguided.

You should give the designer a quick but thorough background of your business so they understand your narrative, target market and brand. Getting to know you, your customers and your outlook can provide a great knowledge base for a designer to work from.

This might be why designers told us their favourite sector to work for is the art/design business itself. They’re speaking to people fluent in their native language, and working in an area of business they know intimately. If you’re outside this area, make sure to invest the time in setting the right foundation and you’ll find this pays dividends in lifting both the engagement and output of your designer.

Finally, if you’ve got a designer you’re pleased with, grow their business. Recommend them to others in your field, and aim to collaborate on projects you think you’d both excel on. Forge ongoing links with good designers and you’ll be rewarded with both great design work and long-term creative allies for your business.

The below graphic shows some of the key findings from 99designs’ survey of designers. 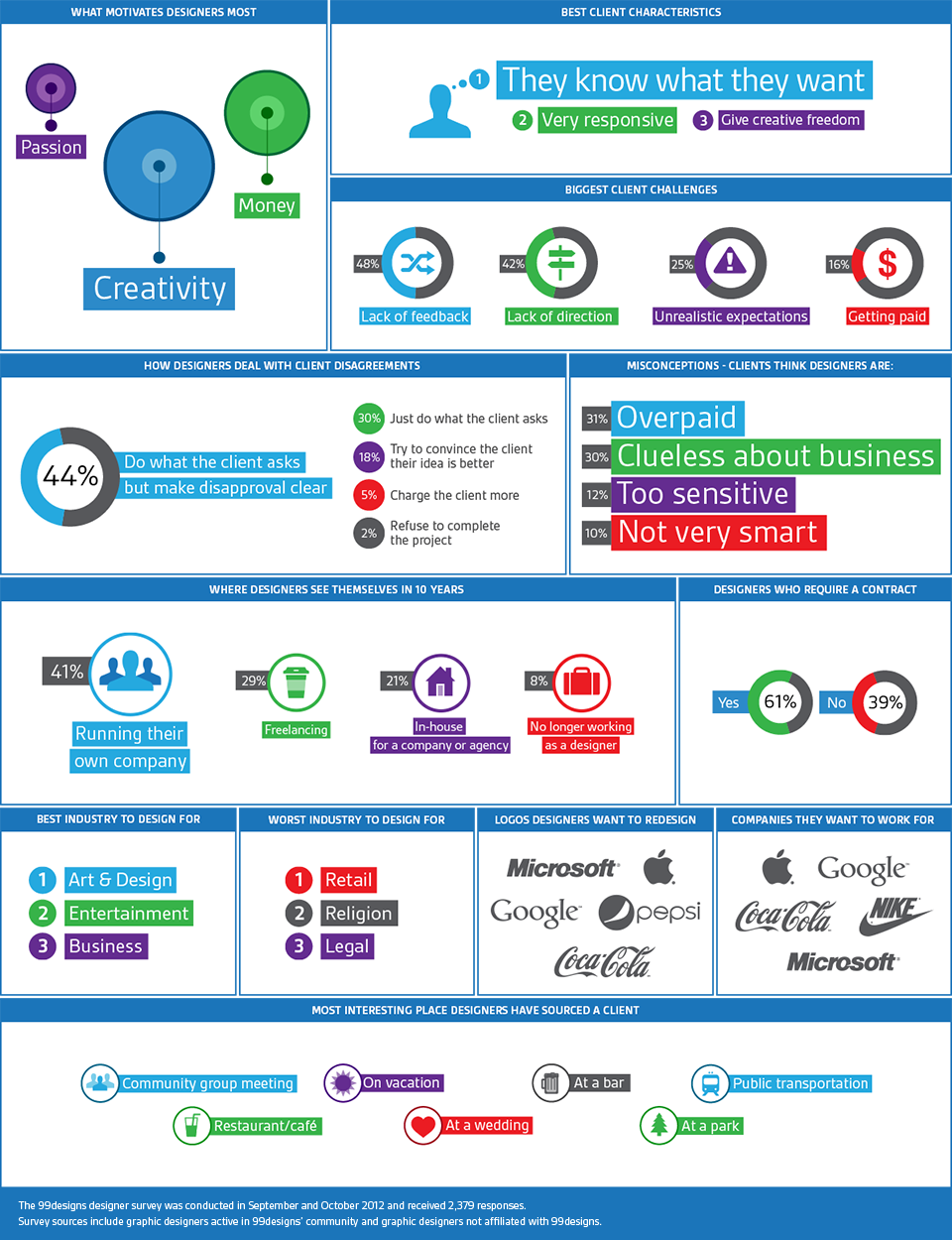