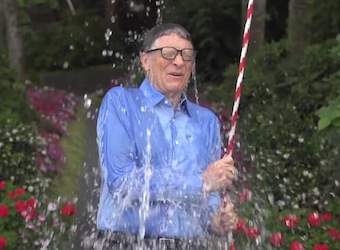 The viral social fundraising effort known as the ‘Ice Bucket Challenge’ has not only achieved enormous reach around the world, but has delivered a six-fold increase in donations for the association tasked with combating motor neurone disease.

Despite the fact Australia is still enduring winter, web users have no doubt been noticing mentions of the ‘Ice Bucket Challenge’ or #IceBucketChallenge.

Originating in the US city of Boston, the challenge is a viral social fundraising effort for ALS – amyotrophic lateral sclerosis, also known as motor neurone disease and, in the US, Lou Gehrig’s Disease.

Put simply, the challenge comprises videos of people having buckets of ice water poured over their heads, and then challenging three other people to do the same within 24 hours or donate $100 to the ALS Assocation.

Videos have been appearing across the social web since early June. On Facebook alone, 2.4 million videos related to the ice bucket challenge have been shared. Facebook’s data team says more than 28 million people have joined the conversation by posting, commenting or liking a challenge post.

And it’s working. The virally-spread reach has meant more donations, which should put criticism that it’s just another Kony-esque example of slacktivism to rest. We’d suggest the distinguishing factor, and the lesson here for other campaigners, is the simple, single call to action: “Donate at alsa.org”.

The ALS Assocation says that for the period of 29 July to 15 August 2014, its national (United States) network of chapters has received donations totalling US$9.5 million compared to $1.6 million during the same period last year.

“These donations have come from existing donors and 184,812 new donors to the Association,” a spokesperson for the ALS Assocation told Brandchannel.

“We were surprised by the campaign, but delighted about the response. The viral nature of social media is extremely powerful.”

Facebook’s data show the movement originating in Boston, where athlete Peter Frates attended college. Frates was diagnosed with ALS last year, and is believed to have started the challenge. Since June, it has now reached almost every country in the world, according to Facebook’s data, with Australia coming in number two in reach, behind only the US.

Celebrities, prominent business people and, yes, even brands have been getting in on the act, simultaneously spreading the campaign and showcasing their own humanitarian credentials.

The Coca-Cola Company’s senior vice president of integrated marketing, Wendy Clark took the challenge (with the help of a Coke polar bear, appropriately), as did Amazon founder Jeff Bezos, Oprah Winfrey, actor Chris Pratt, and Bill Gates, who impressed with his production values and engineering, if not his acting.

US restaurant chain Chili’s got in on the action, in its own way.