The internet will contribute more than half of Australia’s media growth between now and 2015 to account for 14% of revenues, or $4.1 billion, according to forecasts that cover every form of online and offline media.

The predications, from a report compiled by the Boston Consulting Group (BCG) on behalf of Google, put projected revenue for the Australian media industry at $29.1 billion in 2015, an increase of 4% year-on-year from its current point of $24.8 billion.

The online portion of the industry, which currently contributes 7% of media revenues, is expected to be the key driver growth, with revenues from online books, magazines, music, video and movies forecast to show the highest growth levels.

By 2015, revenue from online books is forecast to grow by 907%, to reach $0.8 billion and make ebooks the second largest media type by revenue, just behind online gaming at $0.9 billion. The second highest growth is predicted to come from online magazines, with revenues set to swell by 376% and reach $0.2 billion. Online music, video and movies will be the next highest growing areas, with 160%, 153% and 140% growth respectively.

One of the report’s authors, BCG’s Patrick Forth, told Marketing that video is expected to be the driving force behind much of the revenue increase, as it is used increasingly across most media types, particularly journalism. Forth also says that there is great potential for entrepreneurs to capitalise on some of the high growth categories, pointing out the likes of Halfbrick studios on the gaming side and the Spectator on the news side as examples of this. 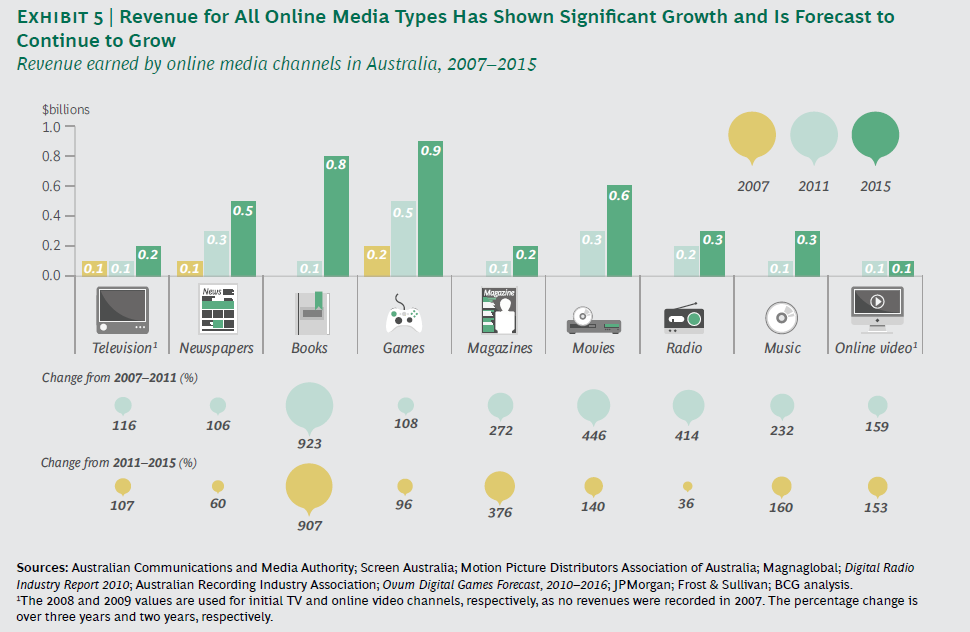 Combing offline and online media industries, TV is predicted to continue to be the highest grossing media type in 2015, increasing its revenue from $7.9 billion to $9.3 billion, newspapers are expected to hold steady at $5.3 billion, and gaming and movies are both expected to increase to $3.0 billion. Magazines is the only media type expected to decline, down from $2.2 billion to $2.1 billion, with the increase in online revenue unable to keep up with the decrease in offlline.

As a percentage of news, current affairs and education revenues, online media contribute 10% of overall income, representing a two-fold increase since 2007. 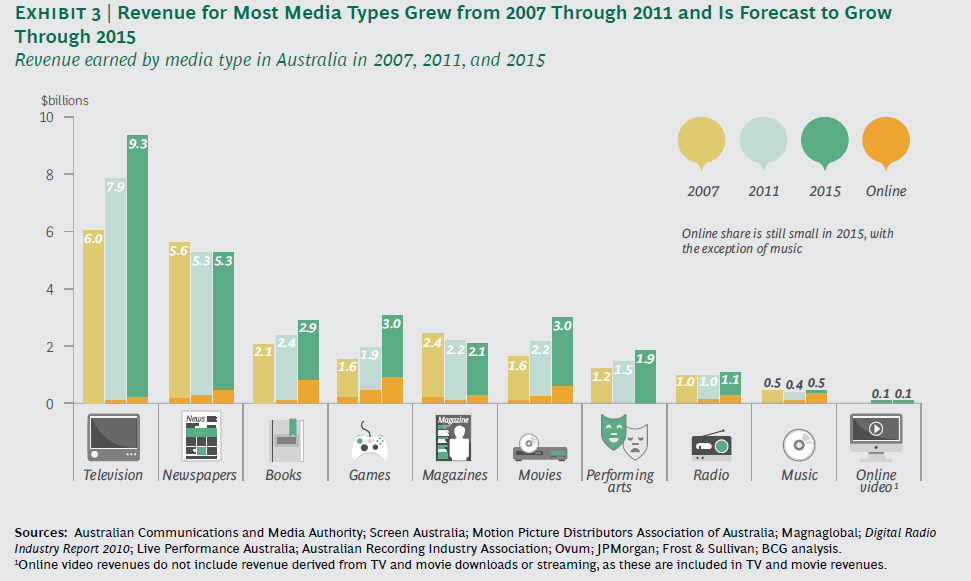 The report, titled ‘Culture Boom: How Digital Media Are Invigorating Australia‘, credits the internet for a rise in consumption of most media types among Australians, who now spend 21.7 hours a week on the internet as well as 15 hours watching TV, 10.3 hours listening to radio and 3.4 hours reading newspapers.

Check out Marketing‘s infographic on how Australians are spending their leisure time online to gain insights into the evolution of online behaviour.

It also identifies the internet as responsible for a cultural change in Australia, by making niche content readily available, enabling remote communities to play a more active role in the economy and helping boost audiences of the arts industry.

Forth comments that the barriers to disseminating content are no longer restricting content creators from getting their message out, resulting in cultural endeavours reaching much broader audiences.

“One example is the Conversation, the website that academics and researchers use which is a great way at very low cost of stimulating much broader conversations of academics in Australia,” Forth says.

“A second example would be the Sydney Opera House and being able to get folks in Kununurra to watch opera or some of the other artistic performances which are shown.

“Artistic endeavours are being stimulated by the internet… We believe it will be a shot in the arm for cultural pursuits, particularly for those people who didn’t have avenues to express them before, a budding musician or a budding artist are able to display themselves much more easily.”

The choice of content and the convenience of online media is cherished by Australians, the report goes on to say, with Australian content the most favoured. According to BCG’s analysis, online content is delivering a $24 billion ‘consumers surplus’ a year, which equates to the perceived value consumers place on content they’re accessing from providers such as BigPond, iTunes and YouTube.

Content created by Australians has also proven highly popular overseas, particularly in the US which accounts for 32% of views for online video developed in Australia, more than 2.2 times the amount of views from Australians themselves.

The number of employees supported by the industry is also expected to increase, from approximately 105,000 people in 2011 to 120,000 by 2015. Online media are expected to create half these jobs.

Writing on Google Australia’s blog, managing director of Google Australia & New Zealand, Nick Leeder, weighs in on the opportunities that exist beyond the big media providers, “As new content, new distribution platforms, and new monetisation mechanisms come together, there’s a lot of opportunity ahead. Existing companies stand to gain, but we’re also seeing a generation of new artists and entrepreneurs emerge here in Australia, from Brisbane games developer Halfbrick to Perth’s Nick Bertke, alias POGO, whose remixes on YouTube earned him work with Disney and Pixar, as well as an exhibition at the Guggenheim in New York.”