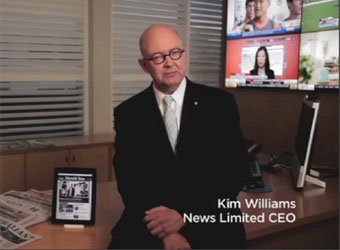 Update: News Corp Australia has announced that Julian Clarke, chairman of The Herald and Weekly Times, will be its new CEO.
–

News Corp’s Australian CEO, Kim Williams has resigned. The media was notified this morning via email.

Williams, who has been the CEO of News Corp (known as News Limited prior to June this year) since December 2011, said in a statement, “I am confident that I leave the company in a strong position and with good foundations for the future. It has been a privilege to work for News Corp across almost 20 years, and I have no doubt it will remain the most memorable element in my professional commercial life. News has many of the finest people in media in our country, and I salute them and their continuing efforts in their service of Australia and Australians.”

News Corp’s executive chairman, Rupert Murdoch also released a statement, having only kind things to say about the departing executive, saying, “I want to sincerely thank Kim, first for his nearly two decades of service to News Corp; but more importantly, for his loyalty and friendship to me and my family all of these years.

“From the early days when we opened Fox Studios Australia, to his tenacious work building Foxtel and FOX SPORTS into the powerhouse it is today, Kim has always operated with great integrity and skill. It was with that in mind that I turned to him and asked him to leave the security of the pay TV business and takeover the whole of our Australian operations as chief executive of News Corp Australia.

“Kim has been a steady and courageous leader at a time when our businesses have faced unprecedented pressure and economic challenges. I want to thank him for his unwavering commitment, and the blood, sweat and tears he has put into News Corp Australia. We wish him well in all future endeavours and look forward to continuing our friendship in the years to come.”

Chief executive of News Corp globally, Robert Thomson, says now is the right time for Williams to move on.

“Kim feels now is the right moment to leave the company, which he has served for two decades, following the successful implementation of the first stage of News Corp Australia’s strategy to drive integration and improve efficiency, to invest in its editorial products and publishing system, and secure a path of growth in a multi-platform world.

“He has been a powerful, eloquent and effective advocate for media freedom and freedom of speech in Australia. His leadership against hastily conceived ‘reforms’ ensured that the vigorous and vital debate that has characterised our country will endure. We all owe him a debt of gratitude for that strong and principled stand,” he says.

“Kim leaves a remarkable, sustaining legacy at these companies and on modern media in Australia. He will no doubt continue to make important contributions to the development of a dynamic, outward-looking, meritocratic country.”