Shocked to learn, via a blog post by Rob Campbell, of Wieden and Kennedy China, that a Louis Vuitton ad ended up on a sex offender app in the US!

Media agencies have  been selling crap to clients for too long. Disguising it in a multitude of terms like arbitrage (what Wall Street engages in when it wishes to be particularly destructive), value add, negotiated outcomes, distress buys and so on.

Truth is, all those clever buys that conceal information and get you reach for free (Right Media used to be one) result in you losing control over your communication and where it appears. This is precisely what has happened to Louis Vuitton which suddenly finds itself in less than desirable company.

When I worked in Singapore I handled Saxo, a premium, European financial services brand. As an agency (I worked for Euro RSCG at the time, Host in Australia) we’d done some very powerful ads that positioned the brand as a a high-end option for people who were ‘serious’ about trading – people who had no qualms losing $100,000 on a  trade provided they made it up in a week or so.

Many of the ads, we later discovered, were appearing in the most unusual of places. Women’s lingerie sites for example – and not even good ones. What the client had been sold was an outrageous promise that, in the new world (whatever that’s supposed to be), you don’t pay for reach, you just pay for the clicks that ensue as a result of it.

Quotas needed to be met. KPIs were based on delivery of impressions, not impact. The consequence was crap – with ‘crap’ being one of the labels that Campbell uses to describe the media strategy developed for Vuitton in his original post.

Here’s the app with the ad: 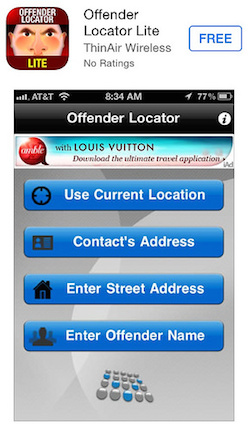