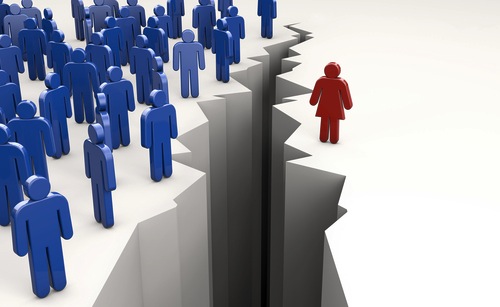 A survey of 603 Australian men and women, released to coincide with International Women’s Day today, found that 91% of men think there is equal pay between genders. Only half of women agree.

Other findings of the survey by recruitment firm Hays similarly paint a picture of male blindness to the issue of gender diversity in the workplace. 83% of men said the same career opportunities are open to equally capable colleagues regardless of gender, compared to 49% of women who think so.

The clear divide is not reflective of ambition for senior roles, for which 44% of men and 43% of women aspire to reach director or MD/CEO level.

Only 51% of women in the survey feel they have the opportunity to self-promote and communicate their ambitions in the workplace.

“Being able to promote your achievements is a key part of successful career development and reaching such roles. When only half of women feel they have the opportunity to self-promote and communicate their ambitions, employers must do more to ensure opportunities are communicated to all and recognise and draw out the skills and ambitions of those around them,” says Nick Deligiannis, managing director of Hays in Australia and New Zealand.

The International Women’s Day theme for 2016 is ‘pledging for parity’. It calls for everyone, both men and women, to ‘pledge to take a concrete step to help achieve gender parity more quickly’.

One field where Australia is performing positively in steps toward gender equality is IT, where Australian companies are recruiting women faster than France, Germany, UK, Switzerland, Hong Kong, Singapore and Japan.

These results from a Robert Half recruitment study surveying 900 CIOs and CTOs world wide, finding that 65% of IT leaders have seen the prevalence of females in the field increase over the past five years.

Growth of female IT professionals in Australia is highest in medium companies (76%) followed by small (62%) and large (58%) companies.

“While it’s a bright outlook for Australian women looking to build a career in technology, there is still a lack of female leaders in senior management and mroe needs to be done to continue boosting the number of women in leadership roles” says Nicole Gorton, director at Robert Half Asia Pacific.

“Nurturing this early interest through education and through mentoring programs will assist women to identify opportunities in the technology sector and create pathways to future leadership roles” she says.