The CMO of McDonald’s talks us through the brand’s current state of play and how its products and communications are evolving to meet changes in customer needs. By Susi Banks.

With a giant lunchbox to launch its steak products, McDonald’s Australia not only tapped into the zeitgeist of experiential marketing, but also made it into the Guinness World Records.

It was a campaign aimed at taking the ‘boring’ out of lunchtime, and McDonald’s Australia CMO Mark Lollback [Editor’s note: the interview for this feature was conducted in November 2015, shortly before Lollback left the company to become CEO of GroupM] says he’s passionate about having fun, being disruptive and really getting out with the people.

“The agency said, ‘Well, the whole campaign’s about lunch, so why don’t we build the biggest lunchbox?’ So we built a big lunchbox and parked it down near the Opera House, where it sat for two days,” says Lollback.

“People wondered what it was about, then it opened as a restaurant and we gave away free sampling tasters of the steak wrap.”

It was so successful in Sydney, he adds, that they packed it up and moved it around the country.

“Consumers loved it and it was a great way to get a trial going, and in a very disruptive way,” he says.

“Everybody was taking photos and putting them on Instagram and generating a lot of awareness for us.” 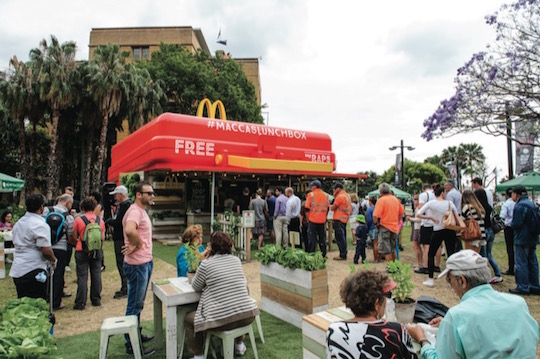 Australia was the first country in the world in which the fast food giant launched steak, just as it had with salads.

“Why? Because we have fantastic beef here and people love it,” he says.

“Although McDonald’s Australia is always trying to be innovative, there is no doubt that we watch what other McDonald’s countries are doing and if it’s something interesting we’ll see if it’s right for here.”

Asked about some of the company’s current marketing challenges, Lollback says all brands have consumer tensions and consumer challenges. McDonald’s has identified a few of those that it focuses on as a business.

“We know that our customers want to feel valued,” he says.

“We know that our customers want to feel good about the food that they eat and we know that they want McDonald’s to keep up with the times.”

“What we want to do is make sure we remain very focused on how best to serve our customers, and how best to keep remaining relevant as a brand in a very competitive environment, which is food.”

With the majority of McDonald’s Australian stores being open 24 hours, seven days a week, Lollback says the company is, in essence, about trying to help people solve problems.

It may be a coffee before work, thinking about the day ahead or a taxi driver driving in the middle of the day or night who wants a snack and to use the bathroom.

“In mobile in particular and in gaming, we’ve had great success,” Lollback says.

“We’re a fun brand at the end of the day and people want brands to act in a fun way and make life fun, right through to advertising on mobile phones and generally trying to connect.”

Lollback says that although McDonald’s is a large brand internationally, each country operates autonomously.

“We don’t get mandates from the US, or the global team. We don’t get told ‘you must do this, you must do that.’ Our management team is all-Australian… I heard recently that there have only ever been two expats,” he says.

“The strategy we’re pursuing here is right for McDonald’s Australia, where our customers are, where our food trends are and where our competition is.

“We have been on a 40-plus-year journey of being part of the Australian fabric and community, and we’re really passionate about serving that community, so I wouldn’t say we ‘lead the world’ for McDonald’s, I just think we’re independent and we do what’s right for us.”

For example, McDonald’s in the US was the first market to test the all-day breakfast, and that will shortly be introduced in Australia.

“We looked at the US results, and said, ‘Well, Australians have been asking for all-day breakfasts for many years, so we thought we’d test that.

We tested that and it was a great success and we will roll it out. That’s a great example of, ‘Why didn’t we think of that?’”

On the other hand, Australia is the lead market for the rollout of ‘Create Your Taste’.

“McDonald’s companies around the world are always looking at what’s happening in other markets, and I’m sure some countries will pick it up and roll it out,” he says. 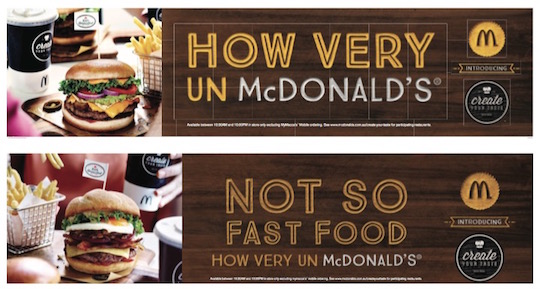 “You can get a barista-made coffee in drive-through. That’s another Australian innovation. We’re the first country in the world to do that.”

Asked about the best media mix for McDonald’s, Lollback says the company in Australia is a large media buyer, as well as a large user of different media channels.

“I would say our media mix is changing, but it’s not extreme. At the end of the day we’re a large brand that has multiple parts, trying to serve our customers seven days a week with multiple messages and multiple demographics. And with each one of those, there are many different ways to get there.”

“We absolutely still use TV and see television as a really important part of our portfolio. We definitely use outdoor, we use radio, we use mobile, we are very much on social media.”

“Money moves around – I don’t think anybody would be surprised to see more money be directed into digital – but it’s not an avalanche,” he says.

McDonald’s has always been a big user of outdoor, says the CMO, but he predicts that once the medium goes more digital, we will start to see some really clever pieces of advertising, including weather-related, date-related and topical news-related activity, the surface of which has only been scratched so far.

“Outdoor will evolve, but it will depend on location. It only makes sense if there is proximity. I think we’ll see some really interesting things happen. In terms of interactivity, mega sites like Trafalgar Square in London are already starting to be utilised very creatively.”

“Most of our customers are driving around in their cars or they’re catching buses and trains and that’s where they see our out-of-home advertising, so outdoor for us is great. It is one of those mechanisms that is very location-based. We buy a lot of outdoor that is based around our locations. We buy a lot of directional signage.”

“Australians also love going on holidays in their cars and we’re a very big part of Australia’s culture and fabric, and we tend to use outdoor, so it will be seen on those road trips. Drive up and down the coast and you’ll find that.”

“Digital is going to open up a lot of flexibility around out-of-home,” he says.

“We’re exploring, we’re experimenting, but to be able to do it en masse, on road signs and the like, it’s still got a long way to go.”

Asked how traditional media like outdoor can become more integrated through interactivity with mobile phones, Lollback points to examples such as offering instant rewards via static sites such as Times Square in New York City. Connecting with the board through a mobile device, people could take a selfie and end up as part of the billboard.This type of activation taps into people’s desire to see their name up in lights.

Another example, from Stockholm, allowed viewers to play a Pong-like game on a digital billboard using their smartphone as a controller. Things like this keep the brand fun, Lollback says, engaging with people who think, ‘This is a fun brand, this is a brand that understands me’.

“There was a very creative piece of McDonald’s outdoor that one of our agencies did in Europe. There was a poster- size case with approximately 40 empty McFlurry cups, and when the temperature hit 35 degrees the door would open, and you could take a cup and go to the restaurant and get a free McFlurry. There were people standing around gunning for the temperature to get up to 35 degrees.” 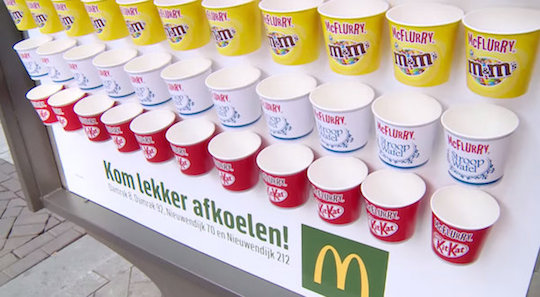 Having been the market leader for a considerable amount of time in its category, McDonald’s doesn’t get too distracted or too focused on its competitors, says Lollback.

“I think we’ve found that the best thing we can do is grow. The more we lead, the more we continue to innovate, the more our customers reward us.”

“There’s no doubt today that customers want more choice than ever,” he says.

“Their demands are higher than ever, rightly, and I think it’s up to us as a leading brand to continue to lead the category.

“I’ve always been of the view that market leaders should never act as a leader, but always as a challenger to keep the category and the industry in growth and keep people excited about it.

“We are not complacent about it, but I think there is a responsibility to lead as well, for our customers and also for the category.”

McDonald’s Australia’s current media agency roster is large and varied, and includes both DDB and Leo Burnett as creative agencies, OMD as media agency, Mango as PR agency and Y&R Group’s Digital Agency, which was appointed earlier this year.

Lollback, who has been with McDonald’s for four years, says he feels really proud for his team and agency partners when they win awards, of which there have been many.

He says he heard a great line that McDonald’s was ‘born in the USA’ but ‘grew up in Australia’.

He says the company likes to think that, “We’re about as Australian as you’re going to get – at being an American company.”