In a sign of the times, a mobile campaign took out the top prize at the Caxton Awards for Excellence in Newspaper Advertising over the weekend.

GPY&R’s ‘Tri Service – Mobile Medic ‘ mobile and tablet campaign, which picked up multiple awards in Cannes, won the 2012 ‘Quinlivan Black’, the award given each year by the chair of judges to the ad or campaign considered best in show. The campaign for the Australian Defence Force also won in the mobile and tablet and technical innovation categories. 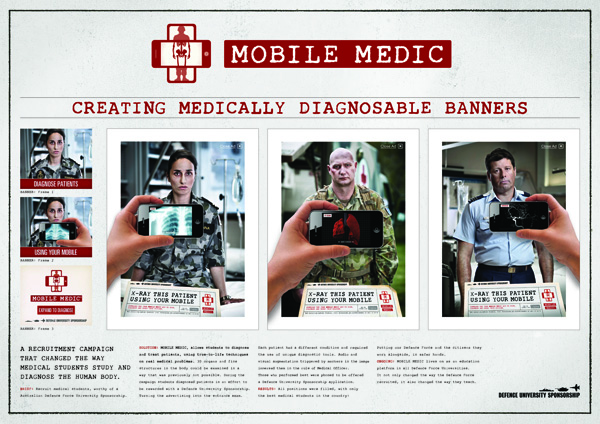 Chair of this year’s judging panel, Ant Keogh says the print work stood up well against the emerging digital campaigns. “We saw a great standard of work in print and the new digital categories, the latter which can only improve as agencies begin to exploit the possibilities of online and tablet newspaper apps.”

“It’s the classic print campaigns for cars and beer and TV stations that stuck with me most.”

A total of 24 Caxtons were awarded across 21 categories, with George Patterson Y&R and the DDB network sharing top position with five awards each. The Special Group in Auckland repeated its 2011 Caxton success by winning four awards for a second consecutive year, while the next highest tally of two awards also went to a New Zealand agency, Colenso BBDO.

The winners were drawn from 57 entries from 19 ad agencies named as finalists for this year’s Awards, with strong competition from both sides of the Tasman.

The prestigious Denis Everingham Award, an honour that has only been bestowed three times in the 38 year history of the Caxtons, went to legendary ad man Gordon Trembath.

The winners of their respective categories: